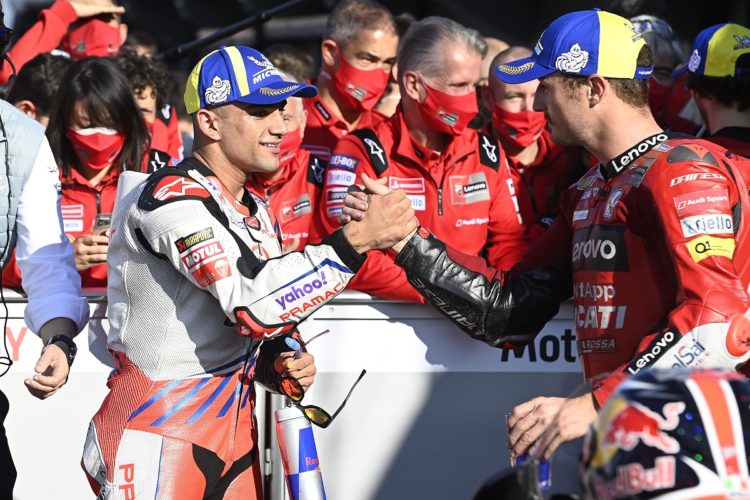 Jack Miller reckons he could have beaten Jorge Martin to the runners-up position in the Valencia Grand Prix, but was left to rue forgetting to arm his ride height device.

The Aussie recovered well in the latter stages at the Circuit Ricardo Tormo after being shuffled back as far as sixth in the early goings to close onto the rear of fellow Ducati rider Martin for second in the closing laps, the factory Desmosedici pilot putting himself in prime position to relieve the Pramac man of the spot exiting the final corner for the penultimate time.

He found himself unable to make a move on Martin though across the final lap as the Spaniard discovered a second wind, leaving Miller to take the chequered flag third to complete Ducati’s first ever 1-2-3 finish in MotoGP.

Miller admitted post-race that he “would’ve liked to have a bit more” from the 2021 curtain-closer after charging back towards Martin and eventual race-winning team-mate Francesco Bagnaia in the climactic moments of the encounter, revealing that he forgot to activate his ride-height device while in position to pass the Styrian GP victor-a mistake he believes prevented him from grabbing second.

“I would’ve liked to have a bit more, I tried to go a bit at the beginning but I was also trying to manage the tyres, both the front and especially the rear we were borderline (wear), so I knew I had to be calm to be there at the end,” explained Miller.

“What I really wanted to do was get out in front and control the pace, I tried to pass Jorge (Martin) and I did him in to Turn 1 but then he got me back at Turn 2 and it was like a domino effect after I got affected as three or four bikes came past me.

“The Suzuki’s especially at the beginning were really able to dive-bomb me because they turn so well and had a lot of grip at that point, so I just needed to reset.

“I left myself a little vulnerable at Turns 1 and 13 as I was really easy on the throttle to try and manage the tyres, I maybe could have been more aggressive with it towards the end but I just really wanted to finish and be on the podium, especially when I saw three of us (Ducati) there.

“I saw Jorge with two laps to go and thought ‘it’s now or never buddy’ and I got close to him but coming onto the last lap I forgot to hit the ride height device coming out of the last corner.

“I was right on his tail and got a beautiful run out and then it started to wheelie, I thought ‘that’s weird’ and I realised just past the start/finish line that it hasn’t squatted yet, so I clicked it but knew it was a bit late.”

Miller also conceded he will have his “work cut out” trying to get the better of fellow factory Ducati man Bagnaia-who scored wins in four of the final six contests this year- and rising star Martin in 2022.

“Next year should be good, Pecco (Bagnaia) is on great form at the moment and he’ll be there next year for sure, as will Jorge I’m sure,” added the three-time premier class race victor.

“We’ve got our work cut out but fourth in the championship this year is an improvement and three better than last year so hopefully we can find another three in 2022.”