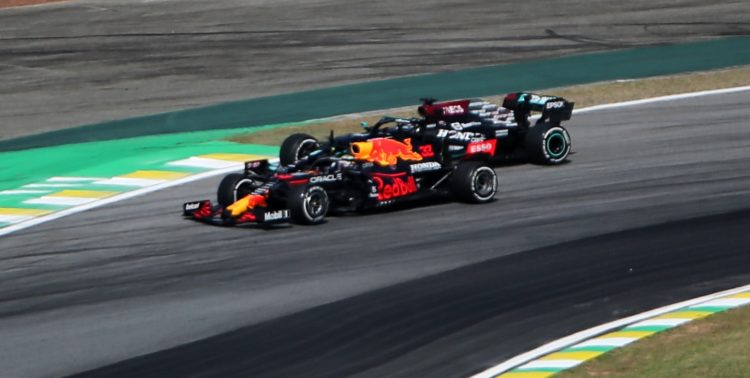 Formula 1’s stewards did not have Max Verstappen’s forward-facing onboard camera available when looking at his close call with Lewis Hamilton in Brazil.

Verstappen led the grand prix at Interlagos when he was challenged by Hamilton on the run to Descida do Lago on lap 48.

Hamilton adopted the outside line but as he turned into the corner Verstappen was still on the apex, and both had to utilise the run-off on the exit of the turn.

At that moment the angle from Verstappen’s car being broadcast was the rear-facing one.

The other cameras available were the trackside cameras, a helicopter shot and the forward-facing onboard from Hamilton’s car.

Verstappen remained ahead and stewards noted the incident but opted against launching a full investigation.

Hamilton went on to pass Verstappen for the lead 11 laps later.

Formula 1 Race Director Michael Masi affirmed that the decision was made without Verstappen’s forward-facing camera and conceded it was “potentially” a crucial piece of information but that “we didn’t have access to it.”

He outlined that “all the angles we don’t get live” will be obtained from Formula 1’s broadcast crew and “we’ll have a look at them.”

These include Verstappen’s forward-facing onboard and the 360-degree camera on the RB16B.

When suggested the call was inconsistent compared to other cases this year Masi retorted: “I disagree that it is inconsistent. If you look at it, as I’ve said many times before, you judge the incident on its merits, and you have a look at all of it.

“Let’s not forget we have the overall ‘let them race principle’, and looking at it all, with the angles we had available, that was the philosophy that was adopted.”

Mercedes boss Toto Wolff expressed frustration at the situation not being investigated and believed Verstappen’s actions warraned a time sanction.