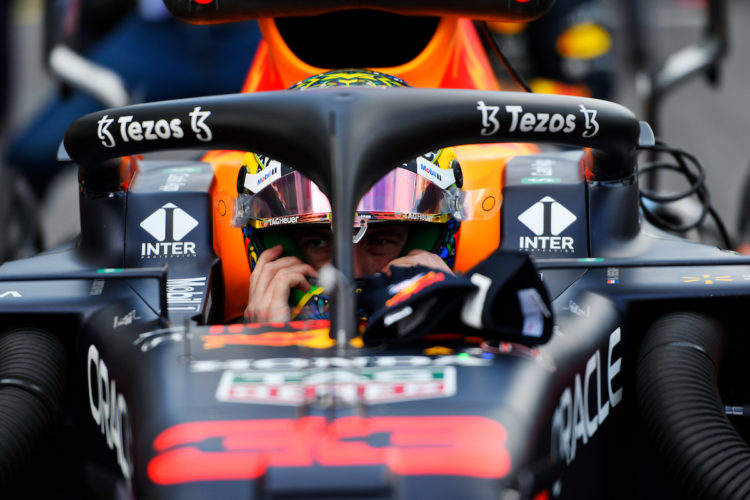 Max Verstappen says he suspected Lewis Hamilton’s rear wing was flexing prior to checking the element post-qualifying on Friday.

After the session, Verstappen was spotted touching the rear wing, and it was later revealed that Hamilton’s drag reduction system (DRS) was running in breach of the technical regulations.

Verstappen was fined €50,000 for the incident, while Hamilton was disqualified from qualifying and forced to start the F1 Sprint from the back of the field.

Verstappen says he was not looking at the DRS on Hamilton’s car, but rather following up on suspicions of the wing flexing.

“You can see on the video what I did exactly,” Verstappen said. “I was just looking at how much the rear wing was flexing at that point. It had nothing to do with the DRS or what they [the FIA] were looking at.”

Earlier this year, new load and deflection tests were introduced after it was spotted that both Mercedes and Red Bull had flexible wings during the early rounds of the 2021 campaign.

Verstappen says his inspection was in relation to the new requirements outlined in the tests.

“There are still things to look into because at a certain speed it seems like the wing is flexing,” Verstappen claimed.

“Of course at the beginning of the season we all had to change the rear wing a bit because of the back off, but it seems like something is still backing off over there. So that’s why I went and had a look.”

When quizzed about his hefty fine, Verstappen asserted that it would be him, not Red Bull, paying the fee.

“It’s quite a big fine, so I hope they have a nice dinner and a lot of wine – I hope good, expensive wine, that would be nice,” Verstappen joked. “They can invite me for dinner as well, I will pay for that dinner too.

“I do have to pay. So that’s a little bit less FIFA points for me on my laptop!”