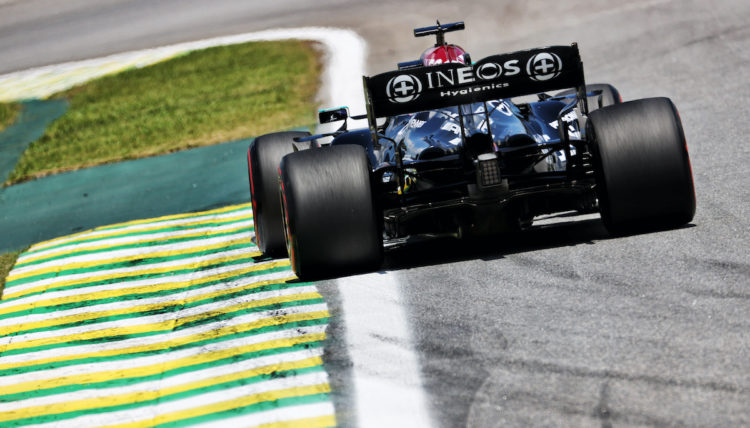 Hamilton was fastest during Friday’s qualifying session for the Brazilian Grand Prix, and was therefore set to start the Sprint event from the front-row. However he was later disqualified from the result after the FIA found his DRS flap opened wider than the permitted 85mm.

Wolff confirmed on Saturday that the wing failed the test by just 0.2mm because of damage to one side – which Mercedes believe might have actually cost them performance.

“Disbelief,” replied Wolff, when asked for his opinion on Hamilton’s DSQ. “Disbelief how things went.

“With a certain respect for the stewards, it’s difficult in that situation as it’s not an easy ruling on such a contentious topic where it is about a world championship, and they need to look at the specific situation and not at the bigger picture.

“But the process from telling us, discovering we have marginally failed the test, we’re speaking 0.2 of a mm, to not allowing this to be fixed like the normal protocol, but rather reported to the stewards, the bullet was out of the gun…”

Wolff explained that the general feeling amongst his team was that the FIA would allow them to fix the wing and no further action would be taken, and even thought it was a joke when told Hamilton would be disqualified.

“We believed it was okay, because the wing was damaged, one side was OK, the middle was OK, the right side was not OK, that actually means we had a performance disadvantage, and we thought in consideration of all these aspects the FIA would say there was damage and therefore we weren’t in breach of regulations.

“The wings are all the same specifications. Haven’t been changed for a long time. The bad wing and Valtteri’s wing passed all the tests before. Nothing was changed. And it failed yesterday on one side because it has simply deteriorated or was damaged, as acknowledged by the stewards, during the qualifying session.

“They said there was nothing that happened with intent from our side and we were disqualified, which honestly I couldn’t believe. I thought that [Sporting Director] Ron Meadows was making a joke when I saw the WhatsApp. So strange things happen.”

Valtteri Bottas passed Max Verstappen during the Sprint event and will start from pole for Sunday’s grand prix, whilst Hamilton climbed 15 places to fifth, but will start tenth after a further five-place grid drop for taking a new engine.

“You have to take it on a chin and that last 60 minutes of motor racing from Valtteri and Lewis brought all the enjoyment back with all the frustrations that happened before,” added Wolff.