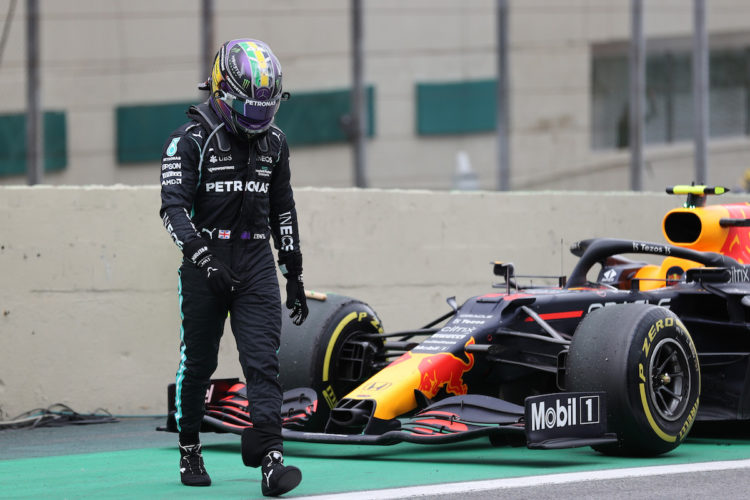 Lewis Hamilton says he was “devastated” to learn he had been disqualified from Friday’s Formula 1 qualifying session in Sao Paulo.

The seven-time world champion was deemed to be running an illegal drag reduction system, forcing him to start Saturday’s F1 Sprint from the back of the field.

However, Hamilton produced an impressive drive and recovered to fifth place by the chequered flag.

With a separate penalty being applied on Sunday for taking on a fresh engine in Brazil, Hamilton will start the Sao Paulo Grand Prix from 10th on the grid.

Speaking to Sky F1 about his disqualification, Hamilton admits it was difficult to swallow his fate heading into Saturday’s shortened race.

“It was definitely tough, and I think while the team were working away delegating with the stewards I was just trying to focus on the work with the engineers,” Hamilton said.

“Keeping the morale with the mechanics high, just focusing on the job at hand and not thinking about it.

“Of course just before [the race] I heard about the result and was devastated but you can’t let it hold you back.

“You got to keep your head down and keep going, quickly reset, put my mind focused on doing what I could do and just giving it my everything.”

A 21-point gap currently exists between Hamilton and championship leader Max Verstappen, who ended the F1 Sprint in second place.

Hamilton added that he wasn’t keen to set a target in the 24-lap race on Saturday, but affirmed that he was determined not to give up.

“Honestly [I] had no idea what was possible, I didn’t set a limit or a maximum, I think when I was at the back of the grid just before the formation lap I could maybe see like 10th.

“I was like okay that’s my goal, I will try and get as far as possible, all of a sudden was

chipping away at it much faster.

“I really used a lot of different things for fuel today, I just can’t give up, you’ve got to keep pushing.”