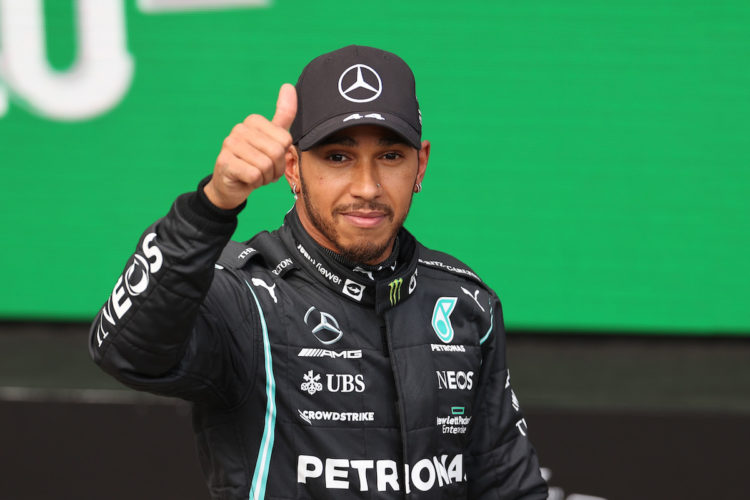 Lewis Hamilton has been disqualified from the Sao Paulo Grand Prix qualifying session due to a technical infringement relating to the Drag Reduction System on his Mercedes W12.

Hamilton was called to the stewards after the FIA carried out a check on the uppermost rear wing element of his car.

As a result, Hamilton has been excluded from the qualifying results and now faces a start from the rear of the field for Saturday’s F1 Sprint.

The stewards outlined that it tested the DRS system by “pushing an 85mm gauge against the gap with a maximum load of 10N (ten newtons.) If the gauge goes through then the car has failed the test. In this case, the gauge would not pass through at the inner section of the wing, but did at the outer section of the wing. This test was repeated four times with two different gauges, once being done in the presence of the stewards and representatives of the competitor.”

While Mercedes asserted that the wing had been designed as outlined by the technical regulations, the stewards stated that it was clear “the additional deflection was due to additional play either in the DRS actuator or the pivots at the end, or some combination or other fault with the mechanism, or incorrect assembly of the parts”.

It added that the same design had been tested throughout the 2021 season and passed with no complications, and that the legality of the design itself was not under suspicion.

Mercedes stated that if it “recognised this problem during qualifying they surely would have sought, and the FIA Technical Department confirmed, they would have received permission to fix the parts or tighten bolts if needed”.

The stewards therefore “were sympathetic to this argument and analysed whether they felt this was a mitigating circumstance” but acknowledged “the regulations are clear and at the moment of the conformity check, the car did not comply”, leaving it no choice but to disqualify Hamilton.

Hamilton will also take on a five-place grid drop for Sunday’s grand prix for a previously issued engine-related penalty.

Both penalties come as a major blow to the 36-year-old’s 2021 Formula 1 title hopes, as he currently trails rival Max Verstappen by 19 points in the standings.

Verstappen was also called to the stewards after footage emerged of him touching Hamilton’s rear wing in parc fermé conditions on Friday evening.

However, the Red Bull driver escaped a grid drop and was instead issued a €50,000 fine for the incident.