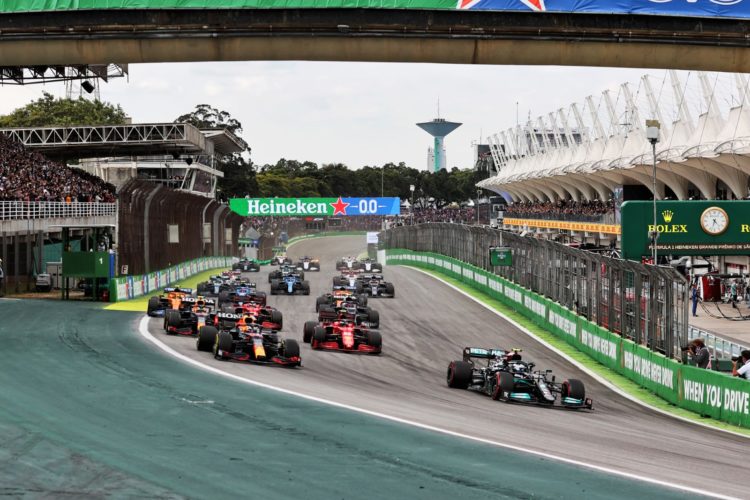 Bottas used Soft tyres to pass Medium-shod Verstappen into Turn 1 and retained the lead throughout the 24-lap encounter.

Verstappen briefly dropped to third, behind Ferrari’s Carlos Sainz, but swiftly took back second and attempted to hunt down leader Bottas.

But the Finn retained his position at the head of the pack and will start Sunday’s grand prix from pole position.

Hamilton started from the rear of the 20-car grid after being excluded from qualifying due to a DRS infraction.

But the reigning World Champion put on a show, much to the delight of the crowd at Interlagos.

Hamilton gained four spots on the opening lap and worked his way into the top 10 by the mid-point of the race.

Hamilton picked off midfield drivers one by one and the highlight was a last-lap pass from a fair distance back on Lando Norris on the final lap.

It left Hamilton fifth, a gain of 15 places, in just 24 laps, meaning he will start Sunday’s race from 10th once his engine penalty is applied.

Sainz profited from a strong getaway to briefly climb into second and, having dropped behind Verstappen, he was able to hold onto third for the rest of the encounter.

Sainz held off Sergio Perez, with Hamilton and Norris next up, while Charles Leclerc claimed seventh, in front of slow-starting Pierre Gasly.

The only major incident of note came early on when the Alfa Romeo drivers brushed wheels into the first corner.

That left Kimi Räikkönen in a spin and he wound up in 18th place.