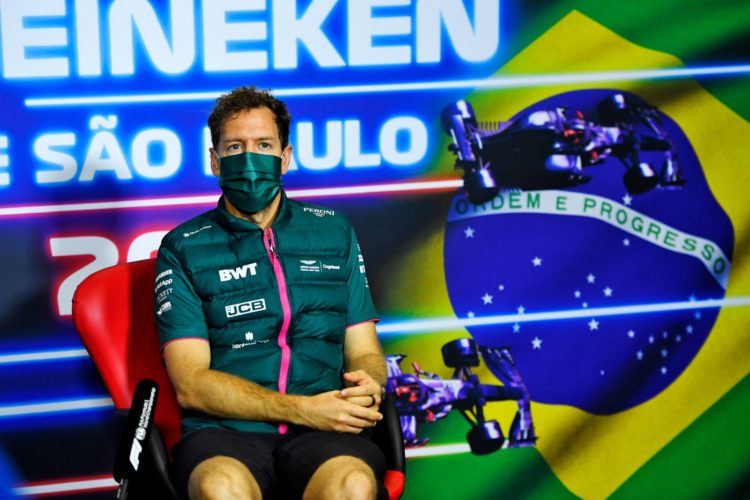 Sebastian Vettel has revealed he visited Pedro Diniz’s farm in Brazil to learn more about environmentally-friendly farming methods, ahead of this weekend’s Sao Paulo Grand Prix.

Diniz started 98 grands prix for Forti, Ligier, Arrows and Sauber between 1995 and 2000, taking eight points finishes, during an era when only the top six scored.

Since retiring Diniz has transformed his family farm into one of Brazil’s leading producers of organic eggs, dairy and fruit and is focused on developing and researching methods of farming that is regenerative and sustainable for the environment.

Vettel, who has expressed an interest in environmental projects, took a trip to Itirapina – around 200km from Sao Paulo – during some downtime between grands prix.

“I knew Pedro as a driver when I was growing up as a child, I knew he was racing in Formula 1 but the he retired and I lost sight as you don’t think about the drivers that retire,” explained Vettel.

“I read a really interesting book about a year ago and it was mentioning Pedro, not because of his racing history but because of what he’s doing now, the way he is approaching agriculture.

“It is basically all about avoiding substances and chemicals and farming in a natural way and giving something back rather than just depleting the soil.

“I think it’s a very exciting way of doing agriculture and I was happy to go to his farm, learn about it, his path, what he’s been through, the objective and his intention, which I think is very good and forward-thinking, and something the world needs.

“It’s a very honourable job to supply the world, supply people with food, and doing it in a responsible and regenerative way is a great approach.

“It’s a great inspiration for me to find something off the racing line that gives you so much joy and passion and purpose.

“I’d never met Pedro before, I didn’t know where he has been going since, but it was really cool to see he was not just doing something but doing something with a purpose and trying to make the world a better place.”

Vettel played down suggestions that he regards himself as an activist, or is planning for a post-F1 future, but outlined that everyone should have an interest in the planet’s future.

“Some people are more into it than others, some are more interested, but it is the biggest challenge humanity is facing I think since its existence and it’s something nobody can run away from, literally, so it is something that is concerning all of us,” he said.

“Whichever angle you try and approach it is probably a good one. I’m not doing things to promote myself, I think it’s great if you have a voice to use that and highlight some things are important to you but at the forefront should always be the action.”