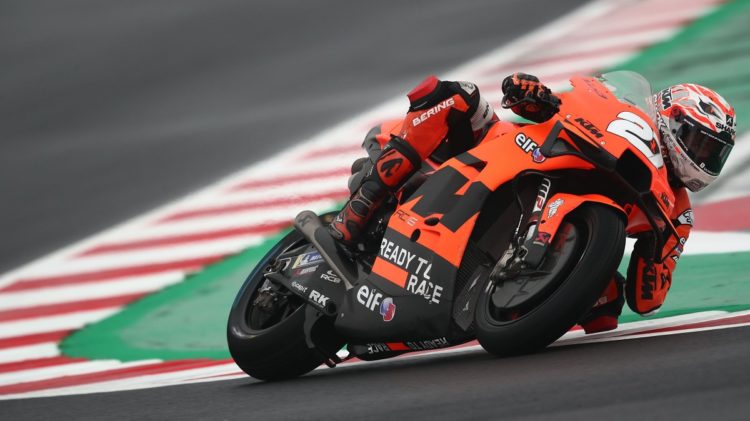 Iker Lecuona tamed the wet conditions to top the opening practice session in Valencia as the final MotoGP event of the 2021 season got underway.

The Tech 3 KTM rider-the Valencia Grand Prix weekend being his last in the series ahead of his move to the World Superbike championship with Honda next year-once again shone as things got slippy as he posted a pair of rapid efforts in the closing stages of the test.

The first practice of the day began in damp conditions, facilitating the use of the wet-compound Michelin tyres as the pilots tried to find their feet, though rain would continue to coat the Spanish venue as the session progressed.

Despite the light showers times continued to drop throughout, with Ducati duo Francesco Bagnaia and Jack Miller looking to control proceedings out in front as they both took turns heading the times.

Miller had just posted a strong 1:40.724s tour to move himself over half-a-second clear of his team-mate, though his session would end shortly after as he ran wide at Turn 1 on the following lap and lost the front of his Ducati across the painted run-off area.

This left the door open for Lecuona to fire in a 1:40.569s gambit in the final stages of the session, a time that would ultimately prove to be unbeatable, though fellow KTM man Miguel Oliveira looked set to eclipse the Andorran before losing time in the final sector.

Lecuona therefore ended up quickest by just under two-tenths over Miller, while Oliviera’s closing effort saw him slot into third just ahead of Pramac Ducati’s Johann Zarco.

Joan Mir also improved late on to go fifth just ahead of Francesco Bagnaia, who also suffered a crash just after firing himself to the top of the timesheets, the 2021 vice-champion losing the front of his Desmosedici at Turn 2.

Luca Marini also suffered a shunt towards the end but posted an earlier time good enough to leave him seventh ahead of Franco Morbidelli on the lead factory Yamaha, while Honda pair Pol Espargaro and Takaaki Nakagami on his LCR-run machine completed the top ten.

Fabio Quartararo once again struggled for speed in the wetter conditions, the recently crowned world champion managing only 15th in the end.

A heavy crash for Danilo Petrucci at the start of his final FP1 session at Turn 4 saw him skip the majority of the running, leaving him 19th ahead of Valentino Rossi in 21st, the Petronas SRT rider electing to not even post a representative time as he hopes to try and end his two-decade premier class career in style this weekend.

The field is made up of only 21 riders this weekend after Honda elected to not replace the injured Marc Marquez for the season finale, Stefan Bradl having taken his place in the Algarve GP one week ago.