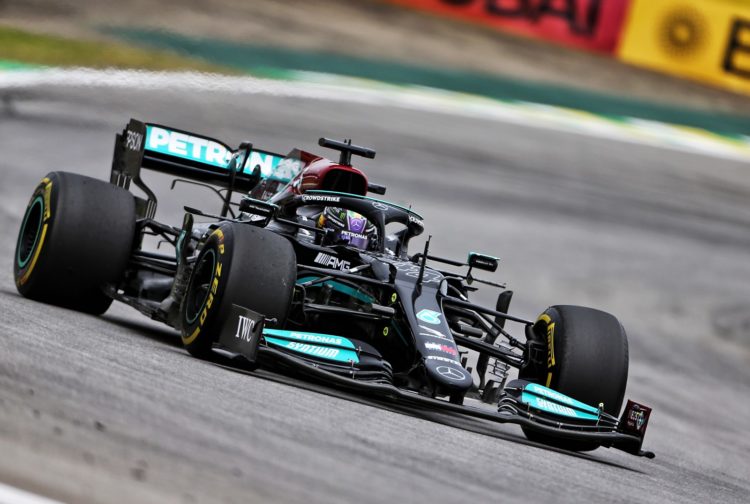 Formula 1 title rivals Lewis Hamilton and Max Verstappen will share the front of the grid for Saturday’s 24-lap Sprint at the Sao Paulo Grand Prix.

Hamilton was dominant across the three-stage qualifying session as he led each step of the way at a cool and cloudy Interlagos on Friday afternoon.

Hamilton’s best time in Q3, a 1:07.934s, left him over four-tenths of a second clear of Verstappen, who he trails in the standings by 19 points.

Hamilton will start Sprint from top spot, and can challenge for three points, but will drop five places on the grid for Sunday’s grand prix owing to an engine change.

While Hamilton and Verstappen will line up on the front row of the grid behind them their respective team-mates Valtteri Bottas and Sergio Perez will slot into place.

Bottas edged Perez by just 0.014s to grab third place though was unable to wrestle a front-row spot away from Verstappen.

Pierre Gasly maintained his excellent form for AlphaTauri to grab fifth place on the grid, ahead of the Ferrari drivers, with Carlos Sainz eclipsing Charles Leclerc.

They marginally got the better of McLaren’s representatives, with Lando Norris in front of Daniel Ricciardo, while Fernando Alonso grabbed a spot inside the top 10 at the expense of Alpine team-mate Esteban Ocon.

Aston Martin had one car out in Q1 and another out in Q2; Sebastian Vettel made it up to 12th but Lance Stroll was able to muster only 16th on the grid.

Yuki Tsunoda showed encouraging speed in Q1, finishing just 0.003s shy of Gasly, but that gap ballooned to over half a second in Q2, leaving the youngster in 13th spot.

Antonio Giovinazzi, facing the final few events of his Formula 1 career, was a top 10 contender in Q1 but failed to replicate that speed in Q2.

It left the Italian slowest of the 15 runners in Q2, behind soon-to-be-retiring team-mate Kimi Räikkönen.

For the first time in a typical one-lap qualifying session Nicholas Latifi got the better of Williams team-mate George Russell, albeit in a battle for only 17th place.

Russell’s unbeaten one-lap qualifying record at Williams had stretched back to the start of his 2019 rookie season against Robert Kubica.

Haas once more finished at the rear of the field, with its rookie pairing of Mick Schumacher and Nikita Mazepin in their usual order, split by two-tenths of a second.

Mazepin expressed frustration at a mistake through Turn 8 on his push lap and cut a tearful figure in the TV pen.