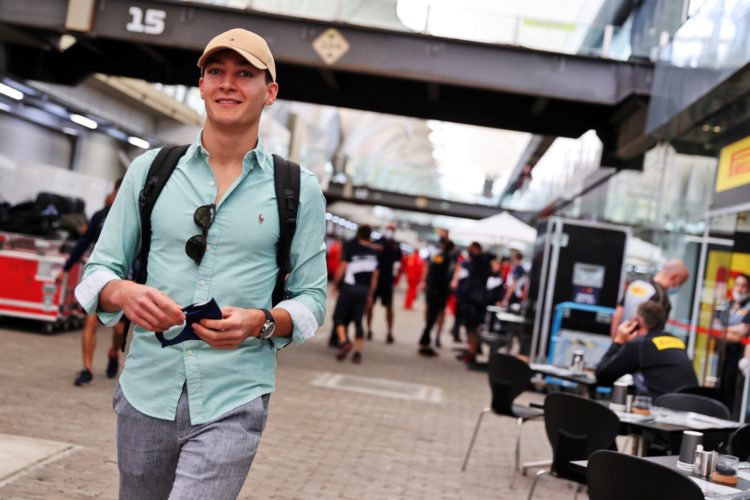 George Russell says he will be “120 per cent focused” on Mercedes immediately after the Abu Dhabi Grand Prix, and will drive for the team at the post-race tyre test.

Russell has been supported by Mercedes since the end of 2016 and has spent the last three years racing for Williams in Formula 1.

During that time he has tested for Mercedes on a handful of occasions and most famously raced for the squad at last year’s Sakhir Grand Prix, substituting for Lewis Hamilton.

Russell will race for Mercedes full-time from 2022 and says his integration will begin straight after mid-December’s season-ending round at the Yas Marina Circuit.

“With regards to how swiftly it will be, Monday morning after the Abu Dhabi race it will be 120 per cent focus on all things Mercedes,” Russell said on his switch, when asked by MotorsportWeek.com.

“I’ll be driving the test afterwards, I will fly back from the test straight to the factory, do some simulator, meet some more people.

“I’m in a very fortunate position because I’ve obviously spent so much time with Mercedes as a team from 2016 all the way through until 2018.

“Whenever we see each other at the airports, or at the tracks, I know them as well as I know everybody at Williams really.

“I’m in a very fortunate position that I’m going into a group and a family that I know so well.”

Russell’s replacement at Williams, Alexander Albon, is set to have to wait until 2022 for his first outing for the team, with Williams not participating in the post-season test due to the lack of a mule car.

Post-season testing at Yas Marina will take place on Tuesday and Wednesday after the race.

The regulations outline that any team participating must run a mule car, modified to cope with the new-for-2022 tyres, on both days, with a 2021 race driver mandatory for one of the days.

Teams must also run a 2021-spec car for a young driver – classified as someone with two or fewer grand prix starts – on the first day of running only.

Alfa Romeo is hoping to run Valtteri Bottas during the test if he is released early from his Mercedes contract.