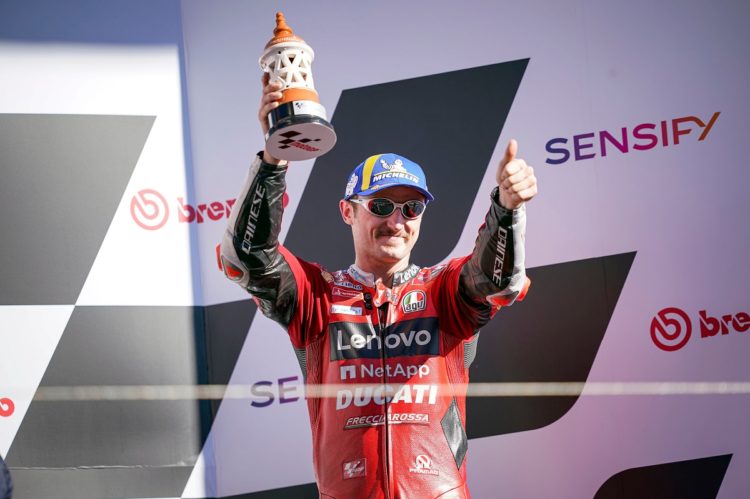 Jack Miller says he was “ready for a scrap” with LCR’s Alex Marquez in the Algarve Grand Prix, the Aussie saying it was “like 2014 all over again.”

Miller and Marquez battled for the final spot on the rostrum in the closing stanza of the Algarve International Circuit encounter, though the Ducati rider had crucially managed to stay ahead of the Honda man by the time the red flags were shown three laps from home due to a crash between Iker Lecuona and home hero Miguel Oliveira.

The pair had swapped places on multiple occasions as they both hit tyre trouble at different phases of the race, but Miller’s attempts to save rubber in the middling section of the contest looked to be paying off as he started to make a gap over the Spaniard, though two near crashes at Turn 5 allowed Marquez to enjoy a second wind.

Miller said after standing on the podium for the first time since Barcelona in June that his tussle with Marquez reminded him of their battle for the 2014 Moto3 title, a fight that would ultimately go the way of the latter by just two points.

“I tried to manage the tyre in the middle part so that I could try and have a bit more towards the end, and then as soon as I needed to start pushing with around eight (laps) to go I passed Alex (Marquez) and had a huge moment off the gas into Turn 7, just losing the rear,” explained Miller.

“I then went to engine brake B (electronic setting) so then he (Marquez) was right on me again, but I managed to get a gap again for the next lap until I got to Turn 5 again and it did the exact same thing.

“I was preparing for a fight towards the end but then the red flag came out, which gives a weird feeling because you’re building yourself up for this all-out war because me and Alex have a bit of history, it was like 2014 all over again (Moto3 title battle.)

“I was ready for a scrap, but we’ll take it and it’s great for the team to win the constructors so now we just have to try and get the teams (championship) at Valencia, a place I love and look forward to getting to.”

The three-time premier class race winner added that his ultra-consistent team-mate Francesco Bagnaia proved too much to overcome in the Algarve GP, Miller reckoning the Italian’s comparative lack of mistakes relative to him and eventual runner-up Joan Mir was the key to Bagnaia scoring his third career victory.

“Pecco (Bagnaia) had an amazing pace, I got the (better) start and then he undercut me at Turn 1 so I thought he really wanted to push, and he definitely did that,” continued Miller.

“I was doing consistent 1:39s with a best of 1:39.6s and he was just like a hammer chipping away at us, then I made a small mistake at Turn 5 but Joan (Mir) and I were doing that (mistakes) throughout the race.”