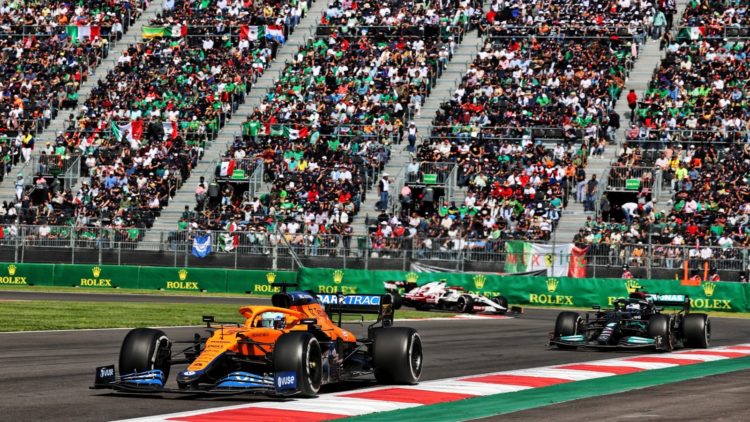 The hot conditions, combined with the high altitude nature of the Autodromo Hermanos Rodriguez, led to a large field spread, with little in the way of wheel-to-wheel action inside the top 10, as drivers struggled for cooling.

Sergio Perez pursued Lewis Hamilton but was unable to mount a serious challenge while the spread was such that only four other drivers finished on the same lap as victor Max Verstappen.

“I know I’ve said this before,” said Brawn. “But the race was another example of why we need the new technical rules that are coming in next season as it showed how challenging it is for the cars to get close enough to launch an overtake.

“Getting within one or two seconds was as close as most could get. And that’s why we wanted to change the regulations. We want to have cars that can race more closely.”

The current cars in F1 are also heavily reliant on generating downforce, which reduces the performance of the car behind by up to 50 per cent when within one second of a car in front.

The new technical regulations that have been developed by Brawn and former Renault Technical Director Pat Symonds, along with a team of engineers, have the aim of reducing the performance deficit to under 10 per cent.

The new generation of cars will utilise the floor and venturi tunnels to create a modern iteration of ‘ground effect’ aerodynamics to clean up the wake of a leading car.

Speaking after the British Grand Prix, Brawn stated: “We saw lots of occasions where cars that were close on performance struggled to race each other.

“When there is a decent performance difference between the cars, you can overtake in the current formula. But when it’s close, particularly on a close track like Silverstone, you can’t.

“We are sure the new car will enable more wheel-to-wheel racing and that is what we want for our fans.”