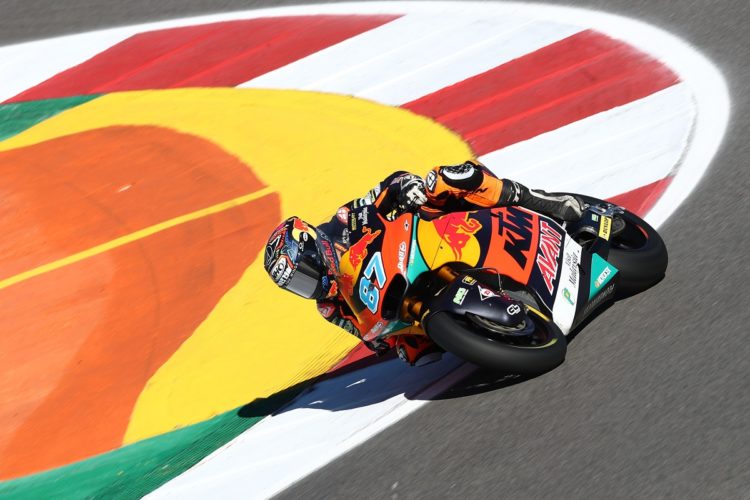 Remy Gardner cruised to a fifth win of the 2021 Moto2 season in the Algarve Grand Prix as championship glory is now well within reach with just one round remaining.

Gardner held onto second off the start as team-mate and title rival Raul Fernandez fired off into an early lead from pole, though he would soon drop behind Marco Bezzecchi as he struggled to get up to speed on his harder-compound rear tyre relative to the softer-rubber utilised by the riders ahead.

The Aussie’s gamble came back to reward him as the encounter neared mid-distance though, Bezzecchi and Fernandez beginning to drop off slightly as their tyres started to wear-allowing Gardner to move into second.

He soon had his sights on reducing Fernandez’s 1.2 second advantage, and with by this point a significantly healthier tyre he made short work of transiting the gap, Gardner drafting past Fernandez on to the run to Turn 1 just past mid-way.

Fernandez refused to let Gardner escape too far up the road here-on-in though, remaining within a second of the series leader across the rest of the contest, although he would ultimately fail to re-mount an attack as he looked to try and hang onto second ahead of a charging Sam Lowes.

Having recovered from a relatively sluggish opening segment of the race, Lowes used his harder rear tyre to close a five second lead down to less than a fifth of that by the time he took the chequered flag, Fernandez having built up just enough of a gap to keep his title hopes alive by 0.885s.

Aron Canet meanwhile managed to relegate American Racing’s Cameron Beaubier to fifth on the final circulation, though the American pilot could be content to score his best ever intermediate class result.

Celestino Vietti managed to hang onto his softer-compound better than VR46 team-mate Bezzecchi as he took sixth ahead of Jorge Navarro, Bezzecchi falling all the way to eighth in the end ahead of the second Marc VDS machine of Augusto Fernandez and Marcel Schrotter, the German rounding out the top ten.

Petronas SRT’s shocking day at the races failed to get any better in the Moto2 outing as both Jake Dixon and Xavi Vierge crashed out early on, as did both Honda Team Asia entries of Somkiat Chantra and Ai Ogura.

Gardner holds a 23-point lead over Fernandez heading into the season finale at Valencia next weekend, meaning he only needs to finish 13th or higher to score his maiden grand prix world championship.