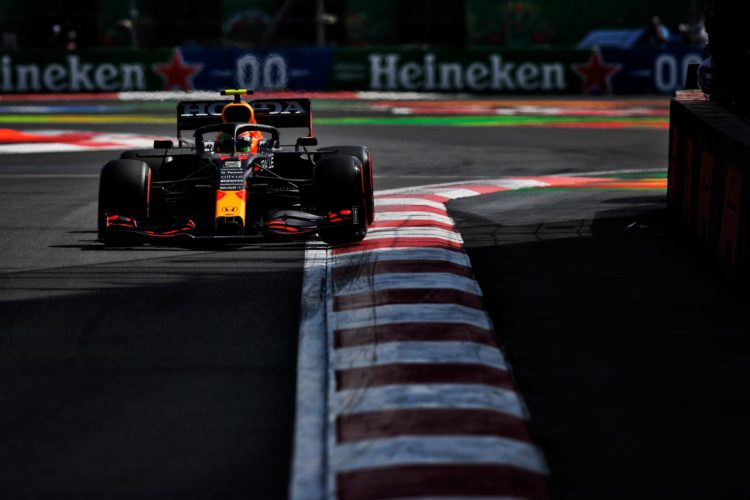 Action was limited in the early stages of the session owing to a spillage in a preceding support session, with cement dust laid down, most prominently at Turn 4 and Turn 8.

Once the front-runners emerged onto the track Max Verstappen swiftly laid down a marker as he maintained his Friday form.

But team-mate Perez moved closer before overhauling Verstappen with a time of 1:17.024 on Soft tyres.

Verstappen went again but a scruffy effort left him unable to improve as he complained of “no grip at all”, a situation he labelled “so weird,” with Red Bull having been working on his rear wing prior to that run.

It left Perez almost two-tenths clear at the head of the field on home turf.

Mercedes on the back foot

Mercedes expected to trail Red Bull at the Autodromo Hermanos Rodriguez and such a scenario played out on Saturday morning.

Lewis Hamilton was third, six-tenths behind Perez, and he expressed surprise over the radio when informed of the deficit.

Valtteri Bottas was close behind in fourth in the sister Mercedes.

Carlos Sainz was ‘best of the rest’ for Ferrari in fifth spot, as AlphaTauri showed pace with Yuki Tsunoda in sixth and Pierre Gasly eighth.

A quarter of the grid will head into qualifying facing a grid penalty.

It means they are all set to start from the back of the grid – though the order in which they lined up will be determined by their qualifying result.

Williams’ George Russell will drop five places due to a fresh gearbox.

Qualifying for the Mexico City Grand Prix is scheduled for 14:00 local time