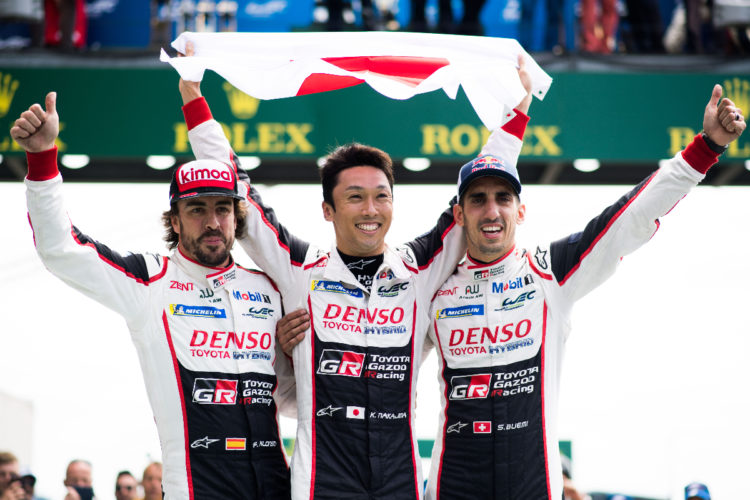 Toyota Gazoo Racing announced ahead of the Eight Hours of Bahrain that Kazuki Nakajima – one of the team’s longest-tenured drivers – will depart at the end of the 2021 campaign.

It marks the end of a ten-year journey for the Japanese star, during which he experienced tremendous highs, crushing lows and became one of his country’s most successful racing drivers.

MotorsportWeek.com takes a look at Kaz‘s journey in the FIA World Endurance Championship.

Kazuki Nakajima was one of the drivers selected by Toyota to be part of its LMP1 effort, but Nakajima’s history with the manufacturer far predates WEC. The car giant picked him up as part of its development programme and supported his junior career. As part of Williams’ deal to use Toyota engines, Nakajima then raced for three seasons in F1 between 2008 and 2009, before he was dropped. After several years of racing in his native Japan, he joined the LMP1 Hybrid effort. For the first few years of the programme, Nakajima did not contest the full season but drove part-time as he also contested the Japanese Super Formula and Super GT series

His debut came at Le Mans, but ended in retirement in a race that featured a notable brush with the Nissan Deltawing. He would make history later in the year, however, as part of the winning trio at the Six Hours of Fuji.

A second win followed at the same event a year later under bizarre circumstances. In a race without a single lap of green flag running due to severe rain, Toyota won when the leading Audi pitted under caution. Apart from Silverstone in 2012, Nakajima rarely visited the podium as Toyota was outclassed by the might of Audi.

In 2014, Toyota introduced the new TS040 Hybrid to replace the TS030, which it had used for the 2012 and 2013. The new car was a vast upgrade in comparison to its predecessor and Toyota took advantage by winning the championship double.

For Nakajima, still on a part-time schedule, the 24 Hours of Le Mans that year produced the first heartbreaking near-miss at overall victory. The #7 Toyota had been the dominant car for much of the race, leading for nine hours, the car suddenly came to a halt at Arnage with Nakajima behind the wheel. The culprit: an FIA-mandated piece of monitoring equipment, which had failed within the car and melted a wiring loom. Audi would ultimately win the race.

Nakajima went winless for the first time in WEC, but scored a total of four overall podiums: three seconds and a third, playing an important role in Toyota’s championship success.

After several years of driving for the WEC squad on a part-time basis, 2015 finally saw Nakajima join the team for the full season. 2015, however, was a difficult year for Toyota as it struggled to compete against Porsche and Audi.

Nakajima scored one podium at the Silverstone season opener, but was injured at the next round at Spa-Francorchamps. After a crash in practice, he was diagnosed with two broken vertebrae, but returned in time for Le Mans. The TS040 Hybrid was also retired from service at the end of the campaign.

In 2016, Toyota introduced its replacement to the TS040: the TS050 Hybrid. The season started off slowly for Nakajima, but at Le Mans, the TS050 was the car to beat.

The Toyotas had qualified behind rivals Porsche, but worked their way up into the lead. Nakajima, driving the #5 TS050 Hybrid, looked set to take the car to the flag for Toyota’s maiden Le Mans win, until a sudden loss of power with mere minutes remaining.

Heartbreakingly, Nakajima then stopped at the line while Porsche was left to pick up the pieces and win. The cause of the issue was later determined to be a failure of the connector line linking the turbocharger and the intercooler. Only one more podium would follow that year as Porsche picked up the title.

With Porsche departing the championship after 2017, Toyota was left alone as the sole LMP1 hybrid manufacturer in the championship. What followed was a period of dominance that lasts until the present day and turned Nakajima into one of the most successful Japanese racing drivers of all time.

For starters, he finally won Le Mans. After multiple near misses, Nakajima and Sebastien Buemi got a new partner in F1 superstar Fernando Alonso and led a Toyota one-two at Le Mans in 2018. A second victory followed a year later, which also crowned Nakajima as world champion, only the second Japanese FIA world champion ever crowned.

During the disrupted 2019-20 campaign, Nakajima won Le Mans a third consecutive time and finished either first or second in every single round of the championship, but lost out on a second world title to team-mates Mike Conway, Kamui Kobayashi and Jose Maria Lopez.

Nakajima remained with Toyota for the maiden Hypercar campaign for what we now know will be his final season as a Toyota driver. He captured two more wins in the opening two rounds of the season and finished runner-up at Le Mans. He is still in championship contention, meaning he still has the opportunity to become a two-time world champion.