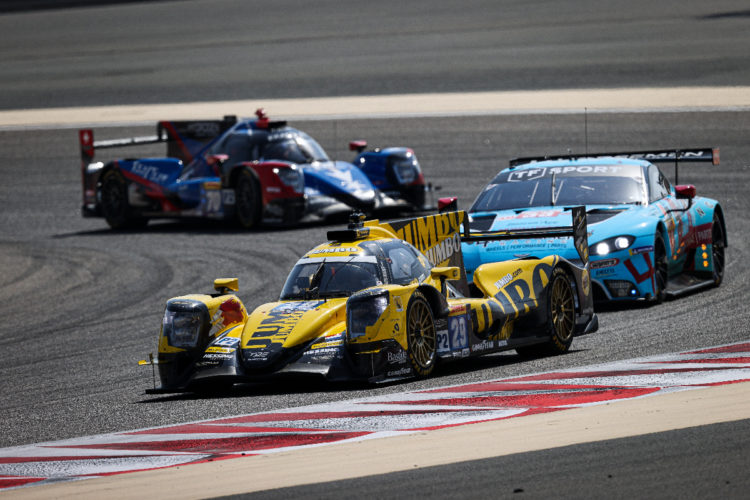 19 cars will take place in the FIA World Endurance Championship rookie test at the Bahrain International Circuit on Sunday.

All three Hypercars have been entered, along with seven cars in LMP2, four in GTE Pro and five in GTE Am.

Toyota Gazoo Racing will run both of its championship-winning GR010 Hybrid Hypercars. Mike Conway will share the #7 car with Charles Milesi, one of two drivers officially nominated by WEC to take part in the test. The #8 car will be shared between Sebastien Buemi and seven-time World Rally champion Sebastien Ogier.

Alpine has entered its #36 Alpine A480-Gibson solely for Nicolas Lapierre.

In LMP2, Richard Mille Racing Team will have its #1 ORECA 07-Gibson driven by W Series stars Jamie Chadwick and Alice Powell as well as Alpine Elf Europa Cup driver Lilou Wadoux. DragonSpeed has invited Sebastian Montoya, son of Juan Pablo, to drive its #21 alongside his father and Ben Hanley. Jazeman Jaafar will drive for JOTA, while Sophia Floersch will test with Team WRT alongside Robin Frijns.

Two teams, Racing Team Nederland and Realteam Racing have entered into the test but have not yet announced drivers.

In the GTE ranks, a total of four Ferraris, three Aston Martins and two Porsches have been entered. AF Corse will host Peter Mann, Simon Mann and Christof Ulrich aboard its works #51 Ferrari 488 GTE Evo alongside Alessandro Pier Guidi in the #52 car, while Porsche has nominated its full Bahrain 8H line-up.

Either Porsche or Ferrari will also welcome Laurents Hörr, the second officially nominated driver, to its ranks for the test depending on the outcome of Saturday’s season finale.

In GTE Am, Iron Lynx has entered both its cars for drivers from various backgrounds. Former GP3 driver Bruno Baptista and TCR Europe driver Franco Girolami will drive the #60 Ferrari, while ex-FIA F3 and Indy Lights driver Alex Peroni and Benjamin Goethe will share the #85 car.