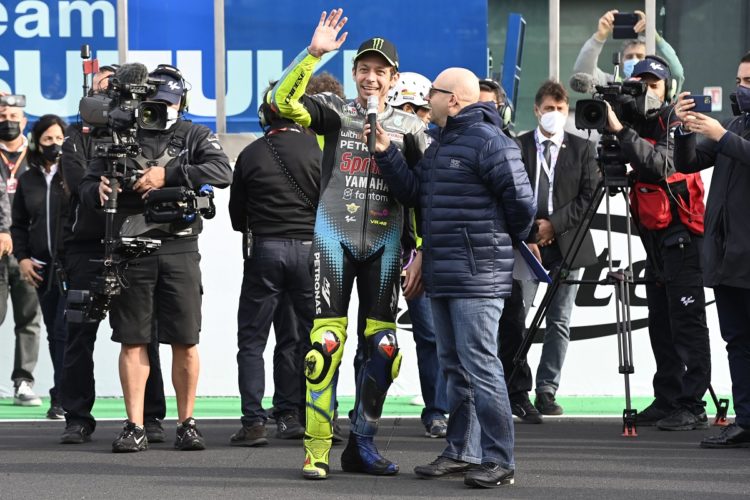 Valentino Rossi was satisfied with a top ten result in the Emilia Romagna Grand Prix, the Italian hailing his run as the “best way to say ciao” to his home crowd.

The second Misano contest of 2021 marked Rossi’s final MotoGP race on home soil with the Petronas SRT pilot set to retire from professional motorcycle racing following the season finale at Valecia next month, and initially it looked he would wave goodbye to his loving home fans with a whimper after qualifying 23rd and last on Saturday.

His race pace was much more up to scratch though as he managed to pass several riders in the closing laps to grab tenth, his third top ten result of what is turning out to be a horror swansong campaign for the seven-time premier class champion.

Rossi though says he is “happy” to pull out such a result racing on home ground in MotoGP for the final time, the 89-time premier class race victor describing his comeback as the “best way to say ciao to all the crowd” while also adding his congratulations to newly crowned world champion Fabio Quartararo, describing the Frenchman as the “right world champion.”

“I’m happy about today because I was able to do a decent race starting from the back of the grid, I had a good pace and I felt good with the bike and the tyres so I was able to push and ride well and was able to fight and improve positions and in the end could arrive in the top ten,” said Rossi.

“This was the best way to say ciao to all the crowd because there was a great atmosphere today and the track was full of fans so I could enjoy some time after the flag, so I’m happy.

“Fabio (Quartararo) deserves the title because he always rides at the maximum, he was always very strong and never made any mistakes so he is the right world champion.”

As a surprise gift for Rossi, best friend and business partner Alessio Salucci-better known as Uccio-organised a special farewell livery to be used by Rossi’s half-brother Luca Marini as well as both VR46 Moto2 riders Marco Bezzecchi and Celestino Vietti on race day.

The one-off paint schemes featured Rossi’s infamous bright yellow colours with the message ‘grazie Vale’ flanking the respective machines, a gesture Rossi labelled as “great and emotional”, joking that even though he doesn’t “normally like surprises, this one was good.”

“For me it was a surprise (special VR46 liveries) normally I don’t like surprises but this one was good, Uccio organised it to have the yellow bikes in Moto2 and MotoGP so it was great and emotional,” added Rossi.

“This has been my life for 30 years and is a great passion, MotoGP is a fantastic sport and it’s always fun to follow so I think that in the future everyone will still follow the races, we have a lot of younger riders that are very strong so I wish good luck to everybody.”