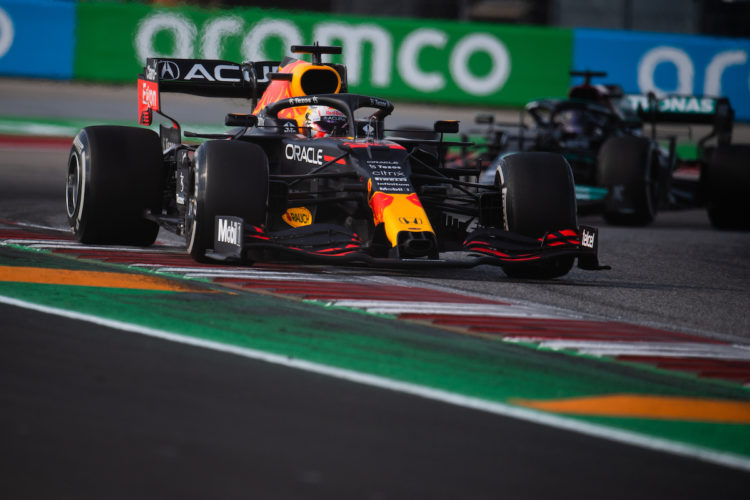 Mercedes opted to call Hamilton in one lap after Perez to ensure it wouldn’t drop from first to third, however the Briton was forced to make up time to Verstappen.

Verstappen made his second pit stop eight laps before Hamilton, giving the seven-time world champion the tyre advantage in the final stages of the race.

However, Hamilton couldn’t pass his title rival, with Wolff believing that Red Bull learned from the period after its first pit stop to not hurt the tyres early.

“You could see the different strategies, one that went for the undercut out of necessity and a very courageous move, because it was very early,” Wolff said.

“Then the second time again to their advantage. Max’s driving, particularly in the last stint you saw that he had learned from the first stint not to damage the tyres too early.

“We were just on the back foot because the car was not fast enough on the Mediums.”

Wolff denies that Mercedes could’ve stopped earlier than it did, insisting a two-stop strategy wouldn’t have been possible if it had done so.

“We couldn’t have possibly gone for an earlier stop based on the data that we had from the Medium, it didn’t look like we would finish the race on a two stop if we pitted earlier.

“But Lewis drove awesomely. He brought the tyre in, remained calm when he rejoined from the second stop with 8.5s to Max, brought it in, increased the pace and at a certain stage there was a massive difference and it was brilliantly executed.

“But it was not quite enough and I think that if we had maybe two laps more, who knows. But it is what it is and you have to congratulate Red Bull for their stops.”