Norris was ‘so scared’ during opening lap battle 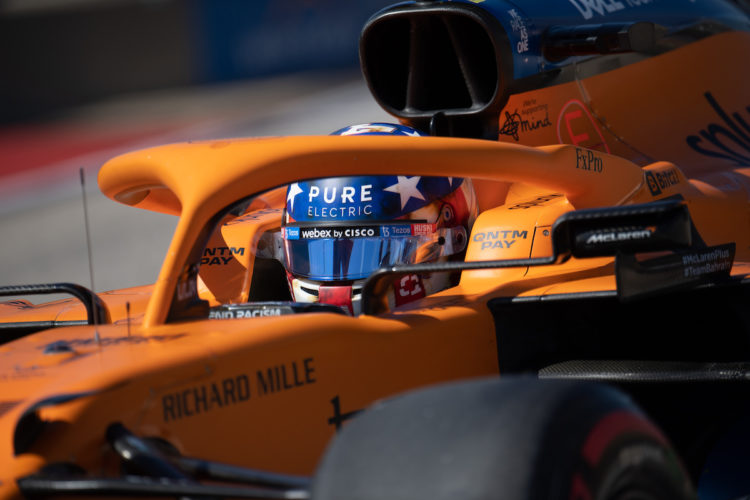 McLaren’s Lando Norris says he was “so scared” during his opening lap exchange with team-mate Daniel Ricciardo and Ferrari’s Carlos Sainz.

Running in seventh place, Norris attempted to overtake both Ricciardo and Sainz into the Turn 12 braking zone.

However, the Briton came close to hitting Charles Leclerc who was running ahead in fourth place, and while Norris briefly ran in fifth, he soon dropped back behind Sainz and Ricciardo.

“I was so scared, because the thing is, it’s such a wide track and it was three abreast,” Norris said.

“I knew Daniel was on the outside so I had to be careful. I couldn’t brake too late because I knew Charles was just ahead.

“The angle, I was on the apex and Charles was pretty much… I was going to T-bone him if I went in any harder. It got a little bit sketchy, obviously didn’t pull the move off. Bit of a shame.

“[It was a] tough, long race, not a lot we could do. At times I thought we had better pace.

“But altogether, considering Charles was 20 seconds ahead or something on Daniel, I think it showed they [Ferrari] were just the quicker car again today. Disappointing we couldn’t do more, that’s the way it is sometimes.”

Norris ended the race in eighth place, losing out later in the grand prix to Mercedes’ Valtteri Bottas.

The 22-year-old says McLaren simply didn’t have enough to make compete equally with Ferrari, with the gap between the two in the Constructors’ Championship now resting at just 3.5 points.

“You don’t know how much they’re saving, everyone is going to be doing something along those lines, everyone’s playing their own game.

“Of course it sometimes yo-yos a bit, you catch up, then drop back and so on. Either way, even when we were at our best pace, the delta is too small.

“Two-tenths ahead, it’s too difficult to overtake. You need to be one second quicker or something, we were never there.”