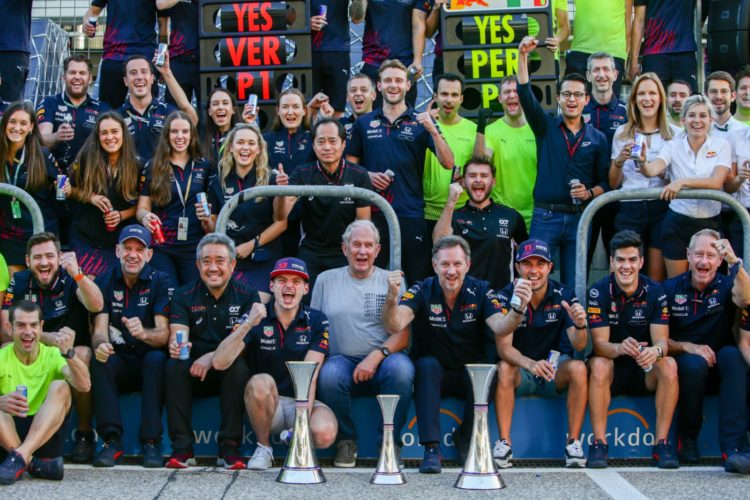 Christian Horner described Red Bull’s win at Formula 1’s United States Grand Prix as “a big one” as it boosted its chances in both championships.

Max Verstappen used an undercut strategy to prise the lead from Lewis Hamilton and held off the Mercedes driver through the final stint to claim victory.

It marked Red Bull’s first victory at the Circuit of the Americas since 2013 while it was only the second time in the turbo hybrid era, after 2018, that Mercedes did not win at the track.

The win enabled Verstappen to move 12 points clear of Hamilton in the Drivers’ standings while Red Bull cut Mercedes’ advantage in the Constructors’ battle to 23 points.

“This is a big one because it has been such a stronghold of Lewis and Mercedes,” said Horner.

“To get the pole was a landmark moment for us and then to convert it into a win even though we weren’t leading at the end of the first lap.”

Horner went on to laud Verstappen’s display in a strategic encounter.

“I think we were quicker on the Medium tyre and Max could see that Lewis was sliding around a lot and we were in danger of overheating our own tyres by being stuck so we decided to take the gamble and bag some free air,” Horner said.

“It was then going to put us under pressure at the end of the race as it was inevitable that Mercedes would run long.

“We were able to push them to pit early in the first stint by getting Checo in as well.

“Of course, they then had the ability to go long in the middle stint to give them an eight-lap tyre advantage to the end of the race.

“Max did a fantastic job managing the degradation and having enough rear tyres left for those crucial final five laps when Lewis was looming large. A phenomenal performance by him.”