Ricciardo ‘would have cried’ in reaction to Earnhardt’s comments 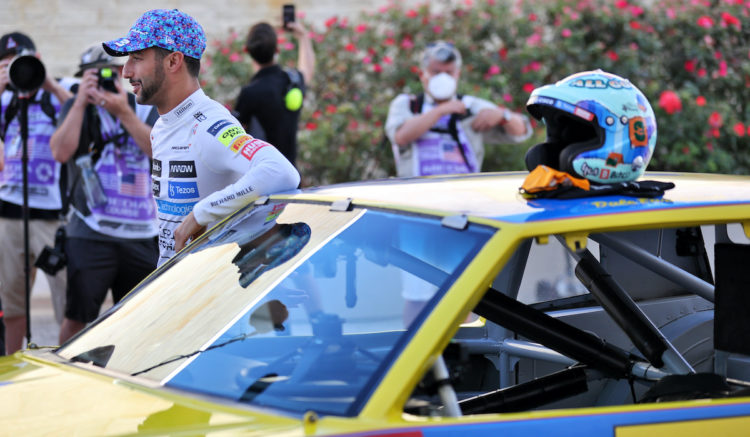 Daniel Ricciardo admitted he would probably have cried in reaction to comments made by Dale Earnhardt Jr., had they been made face-to-face.

Ricciardo got to drive Dale Earnhardt Sr.’s 1984 Chevrolet NASCAR at Circuit of The Americas, in reward for his Italian Grand Prix victory.

The car is owned by McLaren team boss Zak Brown, who offered Ricciardo – a life-long fan of Earnhardt Sr. – the chance to get behind the wheel if he scored a podium finish for McLaren.

Writing on Twitter, Earnhardt Jr. reacted: “I’m happy for Daniel. I’m also appreciative for how he celebrates my father. That makes a lot of dad’s family members and fans smile.”

When asked about those comments in an interview with Sky Sports, Ricciardo admitted had they been made in a more personal setting, he would have become very emotional.

“When Will Buxton told me [about his comment] at the end of the interview, I immediately got goosebumps. Honestly, if we’d been in a private setting and he [Jr] told me that one-on-one, I think I’d probably have cried a little bit.

“It was pretty crazy – like, happy-crazy – to be appreciated by that family in general. I’ve been such a fan.

“After Senior, I was a massive fan of Junior. I was watching every NASCAR race for years. I’d wake up and watch Junior try and win the 500 every February.

“It was pretty cool just to be recognised and appreciated for having support for his dad.”

Reacting to driving the car, the Australian added: “It was sick, it was so much fun,. It’s so different as well. I got my kicks out of it because it’s so raw and foreign. The noise, smashing gears, the driving position… Like everything’s quite unique.”