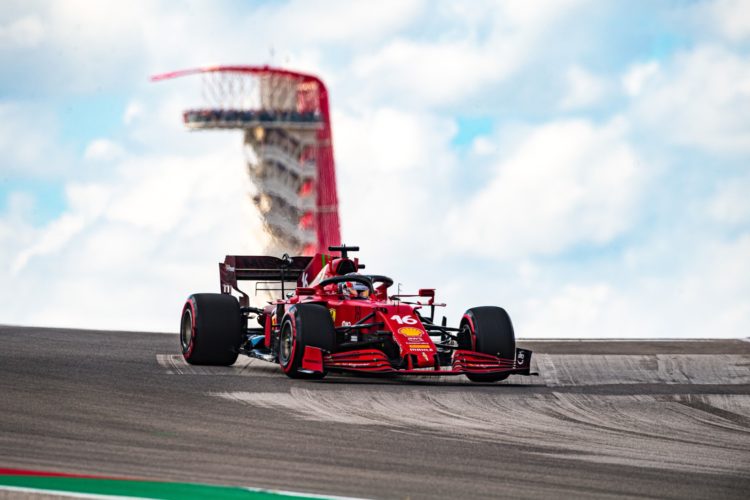 Charles Leclerc says Ferrari can be encouraged by its speed at the United States Grand Prix after not expecting to beat rivals McLaren.

Ferrari and McLaren have been embroiled in a closely-fought battle for third in the championship throughout the course of 2021.

McLaren currently holds a slender 7.5-point advantage in the standings.

But it was Ferrari that had the upper hand in Q3 at the Circuit of the Americas as Leclerc and Carlos Sainz took fifth and sixth, with McLaren pair Daniel Ricciardo and Lando Norris seventh and eighth.

All four will move up a spot on the grid owing to Valtteri Bottas’ five-place demotion.

“It was a surprise, because we expected the McLarens to be stronger than us this weekend on this track,” said Leclerc. “And well, it’s not the case for now.

“It’s not been an easy day. But it’s been a great end to a tricky day. In FP3 I lost the confidence in the car, especially in the second run of FP3, where I lost the rear end basically everywhere.

“And then through qualifying, I gained that confidence again and managed to put that lap in the in the last lap. So very, very happy.”

Leclerc also added that Ferrari can be encouraged by its recent performance in the wake of introducing updates to its power unit.

“We are more competitive all around,” he said. “So, it’s good to see that. I mean, it gives me the confidence for the future.

“Every time we have brought upgrades, we went in the right direction. There were no upgrades that were not as we expected them to be, a bad surprise, basically, a disappointment.

“It’s good to see that and gives me the confidence for the future.”