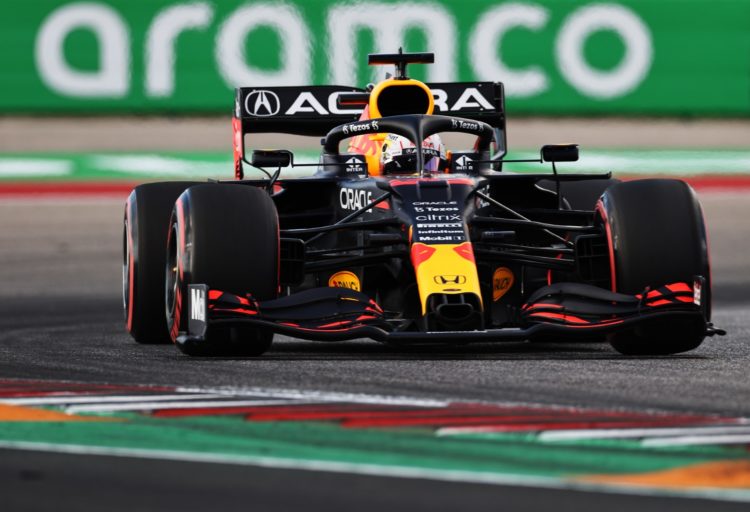 AUSTIN, TEXAS - OCTOBER 23: Max Verstappen of the Netherlands driving the (33) Red Bull Racing RB16B Honda during qualifying ahead of the F1 Grand Prix of USA at Circuit of The Americas on October 23, 2021 in Austin, Texas. (Photo by Chris Graythen/Getty Images) // Getty Images / Red Bull Content Pool // SI202110240025 // Usage for editorial use only //

Verstappen clocked a time of 1:32.910s to end Mercedes’ streak of pole positions at the Circuit of the Americas.

Verstappen’s Red Bull team-mate Sergio Perez had led the way through the first runs as he went in search of a maiden pole position in Formula 1.

But Perez’s time was beaten firstly by Hamilton and then by team-mate Verstappen to score his ninth pole position of the campaign.

Hamilton will line up from second on the grid, in front of Perez, who improved on his provisional time but fell short of overhauling either of the title contenders.

Valtteri Bottas was fourth for Mercedes but will drop to ninth on the grid as a result of his engine penalty.

Ferrari beat McLaren to best of the rest, with Charles Leclerc and Carlos Sainz due to start fourth and fifth respectively, ahead of Daniel Ricciardo and Lando Norris.

Both AlphaTauri drivers made it through to Q3 but were the slowest competitors, as Pierre Gasly preserved his unbeaten one-lap record against Yuki Tsunoda.

Esteban Ocon was 11th for Alpine while Sebastian Vettel was the fastest of the trio who have taken new power units.

Vettel, Fernando Alonso and George Russell were all eliminated in Q2 and will line up from 18th through 20th in that order after their penalties.

Antonio Giovinazzi, who qualified in 13th for Alfa Romeo, will move up to 12th on the grid as a result.

Lance Stroll suffered an early exit as he took only 16th place, in front of compatriot Nicholas Latifi, while Kimi Räikkönen was only 18th for Alfa Romeo.

Haas, as expected, classified as the slowest cars for its home grand prix.

Mick Schumacher was unable to repeat his Q2 heroics from Turkey as he took 19th, with team-mate Nikita Mazepin picking up his usual position at the back.

However, all five of the drivers who were knocked out in Q1 will move up three spots on the starting grid due to the penalties for Vettel, Alonso and Russell.