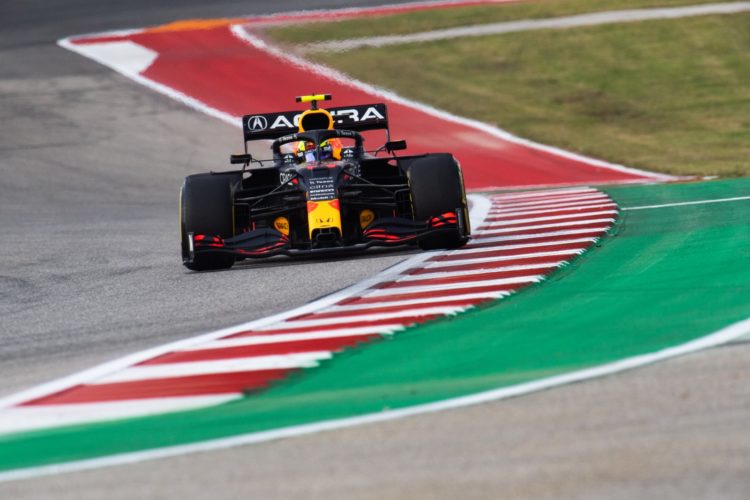 Perez set a best time of 1:34.701s to finish 0.104s up on Ferrari’s Carlos Sainz in Saturday afternoon’s final one-hour session prior to qualifying at the Circuit of the Americas.

As per Friday’s second session, in which Perez was also fastest, neither Max Verstappen nor Lewis Hamilton were able to put in a clean effort on Soft tyres.

Verstappen had a time of 1:34.383s erased after he exceeded track limits through Turn 19 and then had to abandon a second attempt due to traffic.

Verstappen quipped “I’m gonna buy everyone glasses” after having to abort his effort through the second sector of the lap.

Hamilton clocked a time of 1:34.458s but that time was also deleted due to track limits, this time at the brow of the Turn 9 crest.

The transgressions left the pair third and sixth respectively.

Lando Norris maintained his encouraging speed by taking fourth, ahead of Valtteri Bottas and the aforementioned Hamilton, with McLaren team-mate Daniel Ricciardo seventh.

AlphaTauri’s Pierre Gasly bounced back from a low-key Friday practice run to classify eighth, ahead of Ferrari’s Charles Leclerc, who was another to encounter track limits at Turn 19.

Alpine’s Esteban Ocon finished at the foot of the top 10.

There were few incidents in the session, held in hot and sunny conditions, with Bottas spinning exiting Turn 7, while Williams’ George Russell suffered a high-speed spin through Turn 5.

Russell is one of three drivers, along with Aston Martin’s Sebastian Vettel and Alpine’s Fernando Alonso, to take on fresh power unit components, incurring a grid demotion as a result.

Qualifying is scheduled for 16:00 local time