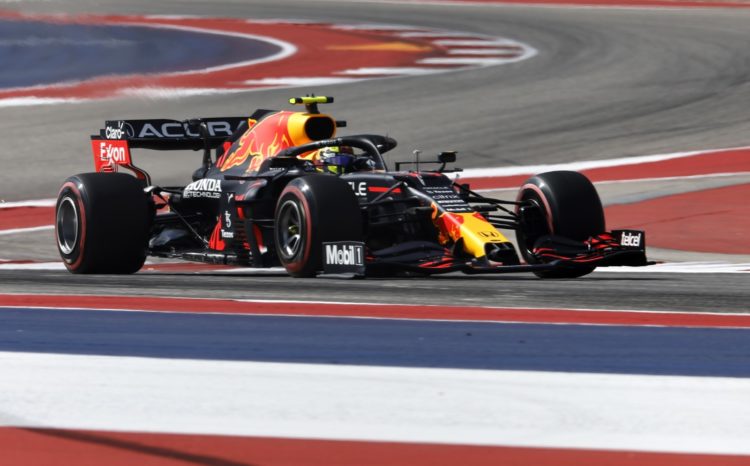 Perez clocked a time of 1:34.946s for Red Bull to finish 0.257s clear of McLaren’s Lando Norris in hot and sunny conditions at Austin’s Circuit of the Americas.

But Hamilton and Verstappen were outliers after separate incidents during the session.

Hamilton set a time which would have been fastest, a 1:34.842s, but he was deemed to have exceeded track limits through Turn 19.

The deletion of that time relegated him to third spot.

Verstappen encountered traffic as he attempted to begin his hot lap and expressed his frustration over his placement on track before returning to the pit lane, turning his focus to longer runs.

The title rivals had previously come close on track, running side-by-side along the pit straight, with Verstappen gesticulating his frustration at Hamilton.

Lance Stroll was a surprise sixth for Aston Martin, displaying a strong turn of speed, while Ferrari was seventh and ninth respectively, with Charles Leclerc in front of Carlos Sainz.

Antonio Giovinazzi rounded out the top 10 as he capped an encouraging day for Alfa Romeo.

Alonso suffered the only major incident of the session when he spun through Turn 19 late on and lightly impacted the barrier with the rear of the A521.

Haas has yet to score a point this season, and has spent much of the campaign marooned at the back, but Mick Schumacher provided some optimism during second practice.

Schumacher, who made it through to Q2 at the preceding round in Turkey, placed 17th, within a tenth of AlphaTauri’s Yuki Tsunoda.

Schumacher also classified in front of both Williams drivers, with Nicholas Latifi in front of George Russell, as the Briton – along with Aston Martin’s Sebastian Vettel – prepares to start Sunday’s race from the back row of the grid.

Schumacher’s Haas team-mate Nikita Mazepin was a second back at the rear of the field.