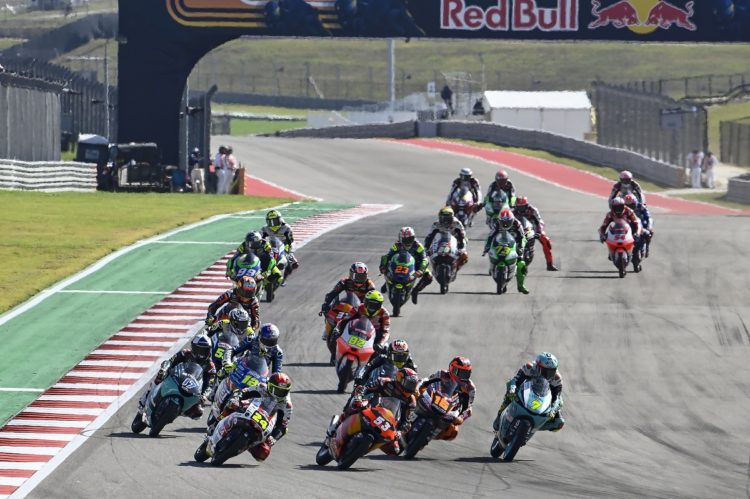 The minimum age to compete in motorcycle grand prix racing will be raised from 16 to 18 for 2023 onwards following changes from the Federation of International Motorcycles (FIM).

The raising of the age limit comes following a string of tragic accidents throughout 2021 across the Moto3-based categories as well as the similarly slipstream dependent World Supersport 300 series that culminated in the deaths of Jason Depasquier, Dean Berta Vinales as well Hugo Millan in a Red Bull Rookies race in July.

Another frightening accident took place at the Circuit of the Americas during the Moto3 world championship contest three weeks ago, with Deniz Oncu picking up a two-race ban for dangerously cutting across Jeremy Alcoba at high speed, causing several riders to slam into the bikes strewn across the circuit.

A document detailing the raft of changes across all FIM ruled series was released on Friday afternoon, revealing that from 2023 the minimum age to enter the Moto3, Moto2 and MotoGP world championships will be raised from 16 to 18.

Exceptions will be made for riders that enter the ’23 season under the age of 18 that have already competed in ’22, while going forward the champions of the FIM Moto3 Junior world championship and Red Bull Rookies series respectively will be given special dispensation to enter the Moto3 world championship at age 17.

These changes come in order to try and reduce the risk the frequency of aggressive riding resulting in incidents, with the bulk of the problems coming from riders aged 16 and under and in series that frequently see large slipstream battles due to the underpowered nature of the motorcycles.

The extra time afforded to the younger riders in lower series will hopefully allow them to mature at a better pace, and ideally allowing them to make their world series debuts under much reduced pressure to what they currently have to sustain.

The changes would mean that current Moto3 series leader Pedro Acosta – who only recently turned 17 – would have been ineligible to join the full championship this year had the rules already been in place, though theoretically would have been able to enter wildcard events as the reigning Red Bull Rookies champion later in the year.

The same could be said for last years Junior Moto3 champion Izan Guevara, who turned 17 in June.