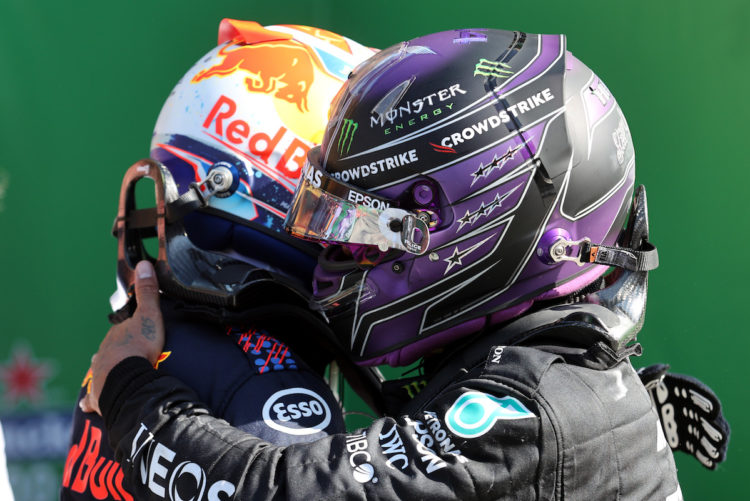 With six rounds remaining in the 2021 season, Verstappen heads Hamilton by six points, having reclaimed the championship lead last time out in Turkey.

However, the Dutchman has lost valuable points this year with a tyre failure in Baku and being collected in a multi-car collision in Hungary.

He has also retired from a race twice following incidents with Hamilton.

Villeneuve pointed to Hamilton’s mistakes, such as when he slipped off the road in Imola but was able to recover in the race due to a red flag, stating the points standings don’t tell the full championship story.

“Hamilton has made many mistakes, but he paid a low price compared to Verstappen.

“Just think of Verstappen’s retirements in Hungary and Britain. Then these were easy races for Mercedes, where Lewis was a bit off.

“At other circuits, they had less pace or they made mistakes, like in Turkey. Yet they are still close in the standings and therefore it is very difficult to say who will win this championship.

“So far, Red Bull and Max Verstappen have been perfect, while you could see some fatigue in Mercedes and Hamilton.”

Despite believing Mercedes are not as united as previous years, Villeneuve says it can’t be counted out of championship contention.

“In the past, Mercedes didn’t really need to push, they won anyway,” he said.

“Like Ferrari with [Michael] Schumacher. Everyone said they were geniuses, even when they made tactical mistakes, they were so strong that they won in the end anyway.

“You can see with Mercedes that the team and the driver no longer seem to be as united as before, if you go by their statements.

“But you absolutely cannot write Mercedes off as dead. In Turkey, they drove with the biggest wing and still nobody could keep up with them on the straight.

“Maybe they have pushed the potential of the engine up, as there are only a few races left. If they can keep doing that, Hamilton will go well at Austin and in Brazil – it will be a big help.”