Norris: P7 ‘the best McLaren could do’ in Istanbul 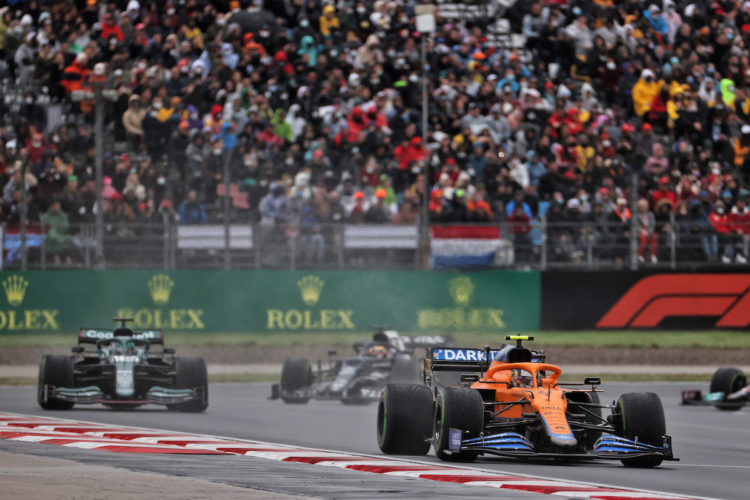 Lando Norris says seventh at the Turkish Grand Prix was the best McLaren could achieve amid a difficult weekend for the team.

Norris started from the same position he finished the race and was unable to keep pace with AlphaTauri’s Pierre Gasly throughout the grand prix.

It marked the second consecutive race Norris has classified seventh, while team-mate Daniel Ricciardo failed to register points in 13th.

With Norris being McLaren’s sole point scorer in the race, Ferrari gained on the Woking-based squad as Charles Leclerc and Carlos Sainz finished fourth and eighth respectively.

“I don’t think we had enough pace to do anything better,” Norris said. “It was a very difficult race, so it was easy to do something bad and make a mistake.

“I’m happy with seventh. It is a few points. But we limited the difference to the Ferraris who had a decent day.

“Not a perfect day for us. We struggled with the car [in qualifying]. We even struggled now in the rain. P7 was the best we could do.”

McLaren currently leads Ferrari by 7.5 points in the Constructors’ Championship as they squabble for third with six races remaining in the season.

Despite being off the pace compared to their rivals in Turkey, Norris insists that McLaren is not muddled by the situation.

“I would not say it [Istanbul pace] is confusing, we need to understand why,” Norris said. “It is not something that you can change. It is just the car.

“We just have to deal with it. At some places it is very good and we need to maximize those.

“Then like today we have to maximize what is a bad result can still be a good one if you maximize it.”