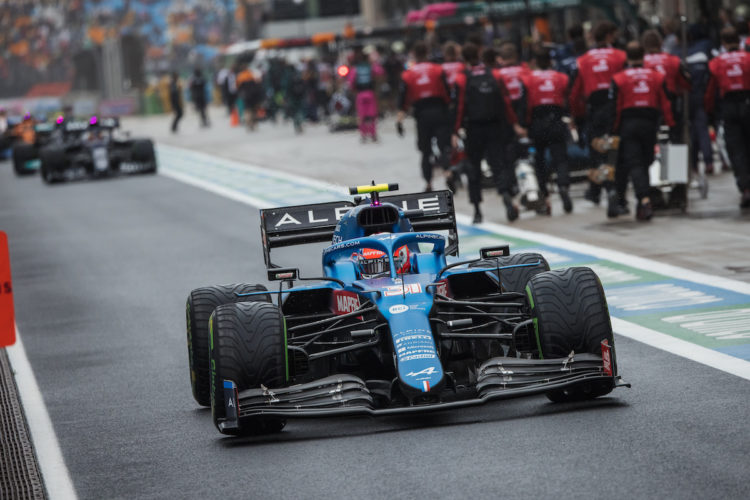 Alpine says it was always under the impression that Esteban Ocon’s zero-stop strategy at Formula 1’s Turkish Grand Prix was achievable.

In wet conditions on Sunday, Ocon ended the race on the same set of Intermediate tyres on which he started and was the only driver not to make a pit stop, completing 57 of the 58 laps, having finished a lap down.

Speaking after the race, the Frenchman says he was only one lap away from sustaining a puncture.

Alpine explained that stopping for a fresh set would’ve hampered Ocon pace as the tyre would go through the graining stage – a situation that Lewis Hamilton found himself in following his late pit stop.

“The reality is that at some point it was clear that stopping him towards the middle of the race wasn’t necessarily going to be quicker,” Alpine executive director Marcin Budkowski said.

“We would have had to go through the graining phase on the new Inter anyway.

“So we decided to leave him out based on what other people were doing and also based on his feedback, he was quite happy with his tyres at that stage.

“We were waiting for a safety car or for the track to dry enough to put dry tyres not knowing whether he would make it to the end.”

Budkowski added that the team would’ve called Ocon into the pits if any safety concerns arose.

“As he went on, we were looking at the data very closely, getting his feedback, looking at the onboard cameras, and thinking actually we can try and push this to the end so let’s do it.

“Obviously we wouldn’t have left him on the track if it was a safety concern. It was there or thereabouts but we felt it was feasible to do that.”

Ocon ended the race in 10th place, crossing the finish line just seven-tenths of a second ahead of Alfa Romeo’s Antonio Giovianzzi.