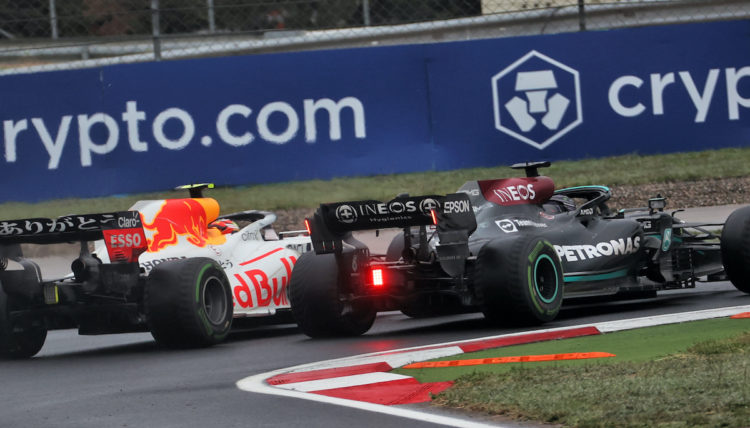 Lewis Hamilton leaves Istanbul with a six-point deficit to title rival Max Verstappen after a fifth-placed finish at the Turkish Grand Prix, a race that saw tempers flare between the Briton and his Mercedes pit wall.

Hamilton had managed to recover to third place, having started 11th after taking an engine penalty. But as those around him pitted for fresh intermediate tyres, Hamilton refused a call to pit, believing he could go to the end of the 58-lap race on the same tyres he started.

When told to “box box, new inters are the way to go” by race engineer Peter Bonnington, Hamilton responded: “Why? I don’t think it is, man.”

Hamilton defied the call to come in, remaining out until lap 49 before he finally agreed to pit, but was unaware of how many positions he would lose by doing so as he dropped from third to fifth by the time he emerged from the pit lane.

Hamilton: “F**k man, why did you give up third place?” came Hamilton’s angry response, before later asking: “What position am I in man?” When told he was fifth, he added: “we shouldn’t have come in man. I told you!”

With just eight laps left, Hamilton struggled on his fresh tyres are came under pressure from Pierre Gasly in sixth, with the AlphaTauri driver closing to within a second at one stage, which angered Hamilton further.

“Gasly at one second,” informed Bonnington. “Leave me alone, man,” came the response.

Hamilton would manage to hold off Gasly’s charge to finish fifth, dropping six points to Verstappen as a result.

Asked after the race if his tyres could have lasted to the end, he replied: “Ocon’s did I heard, so I assume they probably could.”

After taking some time to calm down, Hamilton admitted he should have either listened to the team’s advice to pit sooner, or defied the call and pushed to the end.

“The tyres are bald, so you don’t know how far they’re going to go so there’s definitely some worry about the life of the tyre. I wasn’t really that fast [on new tyres] at the end there and I was struggling, had low grip, not really sure why. All of a sudden I had not such bad pace but I was losing performance to the guys behind.

“In hindsight I should have either stayed out or come in much earlier because when you come in with eight laps to go, you don’t have much time to go through the graining phase of that tyre on a drying track, so I had that whole sliding phase where I nearly lost more positions, so a bit frustrating, but it is what it is.

“It felt good to be third, I thought if I could just hold onto this, this is a great result, starting from 11th, but it could have been worse.”