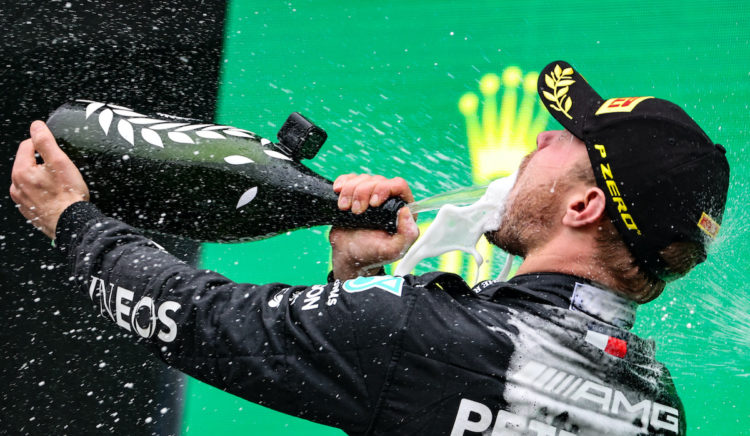 Valtteri Bottas has taken his first grand prix win of the 2021 Formula 1 season after dominating the Turkish Grand Prix.

The Finn headed the field all the way until his pit stop on lap 47, with Charles Leclerc inheriting the lead.

However, Bottas quickly chased down the Ferrari driver and recaptured the position, before going on to take the chequered flag and his first victory in over a year.

Verstappen was second on the road and has retaken the lead of the Drivers’ Championship, heading rival Lewis Hamilton by six points.

Sergio Perez secured his second podium result of the campaign, as he followed team-mate Verstappen home in third place following a late-race overtake on Leclerc.

With Leclerc dropping to fourth place, Hamilton was fifth on the road but was left deeply unhappy with Mercedes’ strategy.

Hamilton started the race from 11th due to an engine penalty, and slowly progressed his way through the field. On lap 35, he was involved in an intense battle with Perez, but couldn’t force his way past the Mexican.

The seven-time world champion went deep into the race in Intermediates, pitting from third on lap 51 and losing track position to Leclerc and Perez.

However, Hamilton struggled to tune his tyres in and couldn’t put an attack on Perez or Leclerc, and found himself being caught by Pierre Gasly and Lando Norris behind.

He nevertheless held on and took the finish line in fifth, with Gasly and Norris finishing close behind. Gasly took a five-second time penalty during the race after contact with Fernando Alonso on the opening lap.

Having started from the back of the field due to an engine penalty, Carlos Sainz moved up 11 positions to score eighth for Ferrari, finishing half a minute ahead of Lance Stroll in ninth.

Esteban Ocon was 10th and was the only driver to finish the race without making a single pit stop – a scenario that is allowed when dry weather compounds are not in play.

His team-mate Alonso was 16th after taking to the grid in fifth. With high hopes of a strong result, Alonso was spun around on the first lap, before being issued a five-second time penalty contact with Mick Schumacher.

The Alfa Romeo duo of Antonio Giovinazzi and Kimi Raikkonen were 11th and 12th respecitly, heading the McLaren of Daniel Ricciardo and Yuki Tsunoda in the AlphaTauri.

George Russell was 15th, two spots ahead of team-mate Nicholas Latifi. Sebastian Vettel briefly, and unsuccessfully, trialled the Medium compound at his first pit stop, but managed to cross the line ahead of Schumacher and Nikita Mazepin.