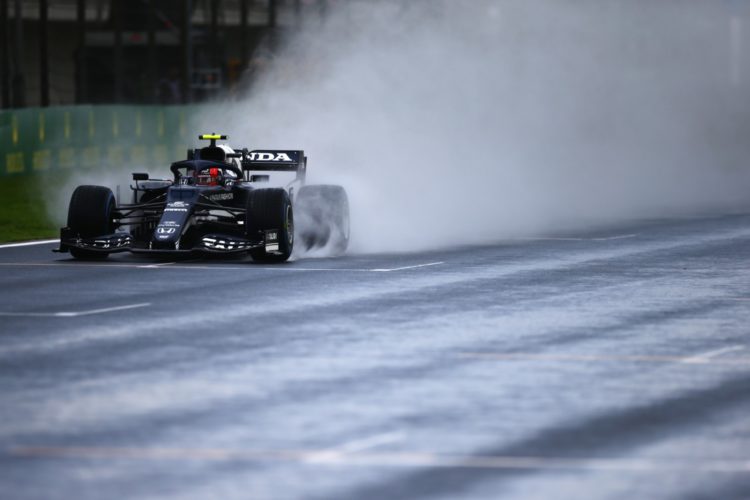 ISTANBUL, TURKEY - OCTOBER 09: Pierre Gasly of France driving the (10) Scuderia AlphaTauri AT02 Honda during final practice ahead of the F1 Grand Prix of Turkey at Intercity Istanbul Park on October 09, 2021 in Istanbul, Turkey. (Photo by Peter Fox/Getty Images) // Getty Images / Red Bull Content Pool // SI202110090127 // Usage for editorial use only //

Heavy rain through the morning let the circuit soaked though conditions gradually improved throughout the course of the session.

There were no repeats of the wet-weather grip struggles the drivers encountered during 2020’s rain-hit weekend, with Gasly’s fastest time 17 seconds up on Lance Stroll’s pole time from 11 months ago.

Drivers nonetheless remained on the green-banded Intermediate tyres throughout the session, with puddles lingering in some patches, most prominently at Turn 9, which caught out a few runners.

Gasly moved to the front of the timesheets on a 1:30.447s, 0.164s clear of Red Bull’s Max Verstappen, with the Dutchman’s team-mate Sergio Perez third.

World Champion Lewis Hamilton, who will drop 10 places on the grid from wherever he qualifies, classified a low-key 18th in the session.

Hamilton completed only five laps during the session, fewer only than Williams’ George Russell, who spun off.

Russell slid wide through Turn 2 early in the session on his first push lap and beached his Williams FW43B in the gravel trap.

Qualifying is scheduled for 15:00 local time