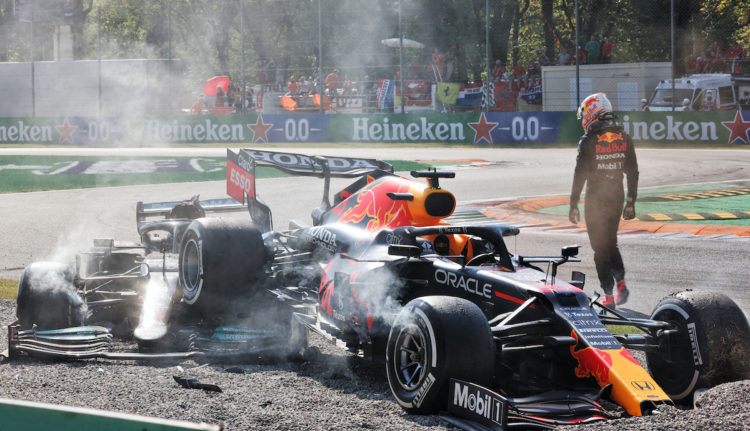 Max Verstappen’s reaction following his race ending crash with Lewis Hamilton at the Italian Grand Prix is proof that the 24-year-old has matured, according to former Formula 1 driver Timo Glock.

Verstappen has gained a strong fan following for his aggressive driving and attitude, something that has landed him in trouble a few times, most notably at the 2018 Brazilian Grand Prix where he and Esteban Ocon clashed on and off track.

But Verstappen’s calm reaction following a crash with his title rival at Monza earlier this year, which resulted in both retiring from the race, is proof that he has matured in recent seasons according to Glock, who expected Verstappen to react angrily.

“He didn’t get involved in anything after Monza, he’s just doing his thing,” Glock told Speedweek. “He would have exploded before. I expected him to rip open [Hamilton’s] visor and knock him off.

“He’s a lot more mature now,” added the German, who now competes in the DTM.

“He has worked on himself so that he understands that first he has to take a deep breath and put his head under cold water,” added Glock. “Because he knows that [reacting angrily] is only harming himself.”

Glock has been impressed not only by Verstappen’s maturity, but also his racecraft following the Dutchman’s 20th to second at the Russian GP last time out.

“What Verstappen delivered in Sochi almost went under the radar – he made the call at the right time and made no mistakes. Such races can decide the fight for the title.

“That shows that he’s ready [to be a champion]. Max is ready, even if the pressure is increasing immensely now.”