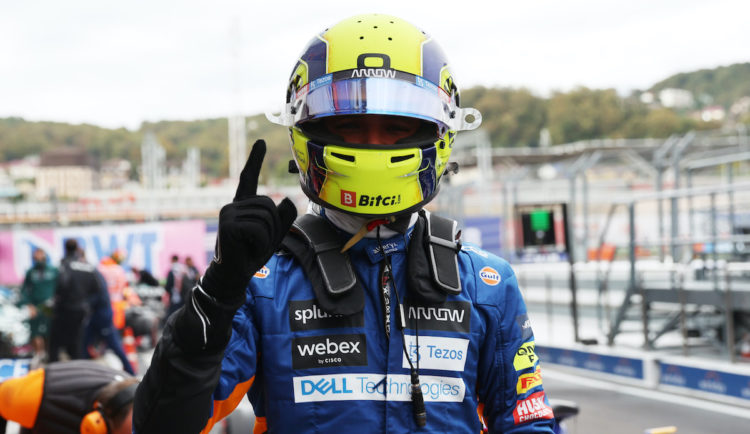 McLaren Formula 1 driver Lando Norris has opened up on his mental health and the stresses drivers go through that perhaps fans don’t see or realise.

The British driver is now in his third season of F1 and has impressed immensely, particularly this season with four podium finishes, adding to his sole podium last year. Norris sits fourth in the championship standings, just 12 points shy of Mercedes’ Valtteri Bottas, took his first pole position in Russia and came close to winning the race before rain arrived.

The 21-year-old, who made his F1 debut at just 19, was clearly emotional after missing out in Sochi, which led to him opening up on his mental health and the pressures drivers are under to perform, during an interview with ITV’s This Morning.

“I guess people, from when they just watch on TV, don’t realise many things that a driver goes through,” he told presenters Phil and Holly.

“It’s a bit of shame, but there are more programmes now where you get to see what the driver is like behind the scenes, and the amount of pressure and stress that they have to cope with.”

Norris highlighted his F1 debut as one of the most mentally difficult moments in his life as the pressures to succeed are so high in this sport, which can see an entire career, which drivers have dedicated their lives to, come crumbling down after a few bad results.

“Coming into Formula 1 at 19, there’s a lot of eyes on you. So, dealing with all these kinds of things, took its toll on me,” he admitted.

“Feeling like I don’t know what’s next? If this goes wrong, if I don’t go out in the next session and perform, what’s going to happen? What’s the outcome of all of this? Am I going to be in Formula 1 next year, if I’m not? What am I going to do because I’m not really good at many other things in life?

“So, just all of that, and then just feeling depressed a lot of the time that if I have a bad weekend, I just think I’m not good enough and things like that.

“When they start adding up over the season, and then the social media side of it all, that can just really start to hurt you.”

McLaren has a partnership with mental health charity Mind, which Norris says has been hugely helpful not only for him, but for the entire McLaren team.

“We partner with Mind, which have helped me massively, and also helped many other people in McLaren, but also just in the world in general,” he explained.

“So speaking to McLaren, speaking to the people that are around me and my friends that I trust, and, also Mind, I’m in a much better place now. I’m much happier and I can enjoy everything I do.”