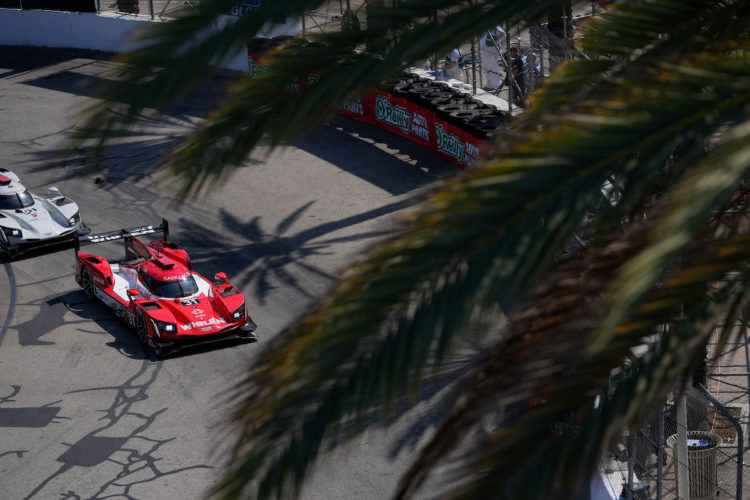 Race winner Felipe Nasr has questioned Kevin Magnussen’s aggressive approach to the opening laps of the Acura Grand Prix of Long Beach, labeling it as ‘unnecessary’.

Nasr was challenged by Magnussen on the opening laps of the sprint round on the street of Long Beach, with the Dane taking the lead with a bold pass into the Fountain section a few laps into the race.

Not much later, the Dane would overshoot turn one while trying to defend his leading position, missing the apex and making contact with the tyre barrier and the concrete wall.

This relinquished the lead back to Nasr, who would go on to win the race alongside Pipo Derani. Magnussen would ultimately finish second place, with team-mate Renger van der Zande retaining their podium spot in the battered and bruised Cadillac.

“I couldn’t understand why another Cadillac that isn’t even in the championship is fighting that hard,” Nasr said. “That, for me, is unnecessary. But I’ve known Kevin through many years of racing. He hasn’t changed and I kind of expect that from him.”

Magnussen and Nasr have previously raced against each other in Formula One. They shared the grid throughout the full 2016 season, with Magnussen racing for Renault and Nasr spending the season with Sauber.

The dominant win for Nasr and Derani, who remained unchallenged after retaking the lead from Magnussen, means that the duo is now right back in the championship hunt with only a single race left to be run.

Whelen Engineering entered the weekend 98 points behind championship leaders Wayne Taylor Racing. Thanks to Nasr’s pole position, the race win and a fourth-place finish for Ricky Taylor and Filipe Albuquerque, the deficit is reduced to 19 points. Only the season-closing Petit Le Mans round remains.

“It’s never over ‘til it’s over, and I feel that’s the mentality of the team,” Nasr said. “We came here with the mindset of maximizing the points. We did that in qualifying [Friday], and today the same thing. What an amazing car the team gave us – it was super-fast.’