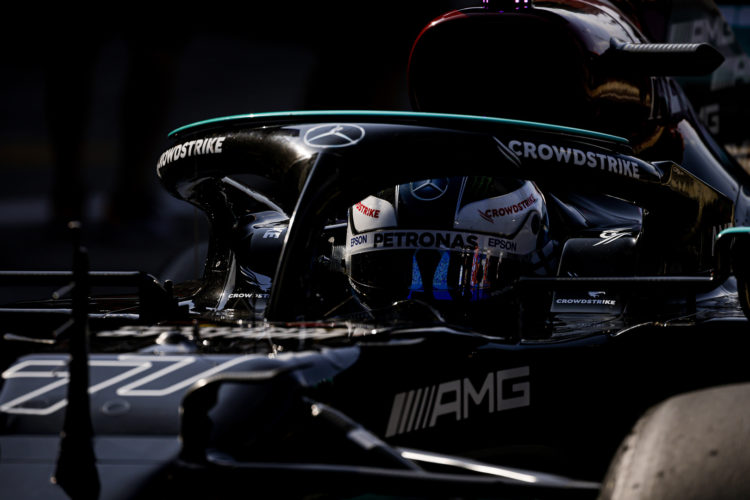 Bottas clocked a time of 1:34.427s to finish 0.211s clear of team-mate Lewis Hamilton in fine and sunny conditions next to the Black Sea.

Sochi Autodrom has been a Mercedes stranglehold since the former Winter Olympics venue joined the calendar in 2014.

The reigning World Champions have yet to be beaten at the circuit, with Hamilton victorious on four occasions, and Bottas triumphing twice, including his maiden win in 2017.

In a relatively uneventful session drivers carried out low-fuel Soft tyre runs before switching to long run data gathering in the latter stages of the session.

Heavy rain is due to strike the circuit through most of Saturday though the current forecast suggests it could ease in time for qualifying.

Formula 1 title leader Max Verstappen heads into this weekend’s race facing a three-place grid penalty after being deemed predominantly to blame for his clash with Hamilton in Italy.

The Dutchman could yet drop to the rear of the grid, if he takes on a fresh power unit, but Red Bull has yet to determine whether it will take such action this weekend.

Verstappen trailed Bottas by over a second after his first Soft tyre run but went quicker to close to within 0.227s of the Finn, finishing just 0.016s behind title rival Hamilton.

Verstappen, though, completed only 13 laps in the session – eight fewer than any other driver – with Red Bull working on his RB16B in the garage during the closing stages.

Charles Leclerc, running the updated Ferrari hybrid system, was the only other driver to set a time within a second of Bottas’ benchmark.

McLaren claimed a surprise 1-2 at Monza but finished Friday’s opening practice with Lando Norris eighth and Daniel Ricciardo down in 14th spot.

Norris had an unusual incident in which he spun at pit entry after the session, lightly brushing the wall with his front wing, after the rear of the MCL35M appeared to lock.

Red Bull’s Sergio Perez was ninth, ahead of the Alpine pair of Fernando Alonso and Esteban Ocon, with Lance Stroll and Antonio Giovinazzi 12th and 13th respectively.

Kimi Räikkönen was cleared to return to action, following his positive Covid-19 test at Zandvoort, and finished 15th overall.

AlphaTauri rookie Yuki Tsunoda was a lowly 16th, two seconds off team-mate Gasly, having complained about the nervousness of his AT02.

Williams had a low-key session, with George Russell and Nicholas Latifi only 17th and 18th, while Haas occupied its usual positions at the rear of the 20-car field.

Home representative Nikita Mazepin was 19th, four seconds down on Bottas, with Mick Schumacher behind his team-mate in 20th.