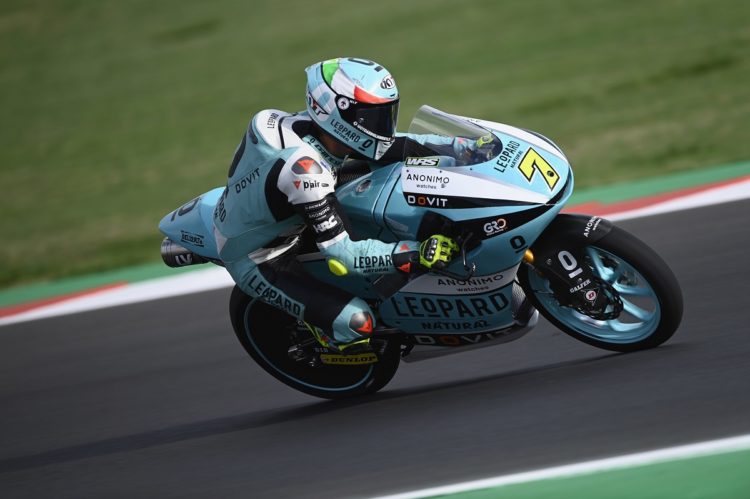 The Leopard Racing rider remained firmly within the leading group of competitors throughout the 23-lap encounter, though the Italian looked set to have to be content with battling for the runners-up spot as countryman Fenati escaped out in front.

The MAX Racing ace held the lead off the start from pole and immediately crafted a half-second lead over Niccolo Antonelli, the Avintia rider the only man able to keep pace with Fenati as the pair started to gap the group behind-led by Foggia.

A crucial mistake by Antonelli though as he ran off the circuit after out-braking himself at Turn 4 was just what Fenati needed to stamp his mark on the race as he was gifted a 1.5 second lead and Antonelli dropped back to seventh, the Silverstone winner able to continually build his lead well past half distance.

Disaster was just around the corner for the race leader though as he dropped his Husqvarna at Turn 15 having built up a near three-second advantage, Fenati’s race ended in the gravel as Foggia now assumed the race lead.

Things would run like clockwork for Foggia across the remaining tours as he managed to build up a comfortable gap over the chasing Andrea Migno to take the chequered flag 0.565s clear, although it was Antonelli that ultimately claimed the runners-up spot after charging back towards Migno in the closing laps.

He got the better of the Snipers racer at the death to storm across the line three-tenths clear, leaving Migno to complete an all-Italian rostrum in Italy.

Title contender Sergio Garcia managed to slightly narrow Pedro Acosta’s championship lead as he bagged fourth after coming out on top of a battle with Jaume Masia in the final couple tours, though this tussle would only serve to drop him from the podium battle.

Behind Masia in sixth would be Darryn Binder, the Petronas SRT man remaining a part of the leading group for most of the contest before dropping away in the latter stages, while Acosta salvaged seventh after lacking pace to go with the front-runners to lead the pursuing group.

Carlos Tatay claimed only his third top ten result of the year in eighth ahead of Stefano Nepa, while Ayumu Sasaki rounded out the top ten finishers.

Even though Garcia’s run to fourth saw him close down his gap to Acosta to 42, the GasGas pilot actually drops to third overall with four races remaining as a result of Foggia’s second straight success.

Foggia now sits as the runner-up in the standings level on points with Garcia-his four wins eclipsing the Spaniard’s three- while Fenati’s untimely exit all but ends his hopes of a maiden Moto3 world title as he tumbles to 76 behind with only 100 markers left on the table.