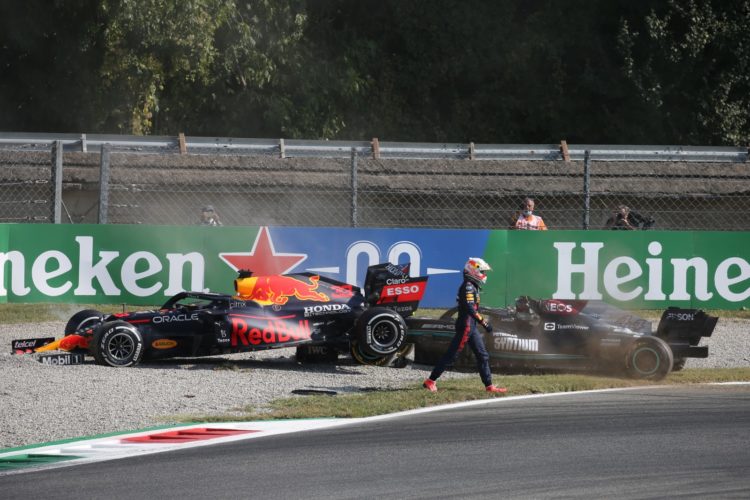 Red Bull team boss Christian Horner believes the FIA could have made a “statement” at the Italian Grand Prix by penalising Max Verstappen and Lewis Hamilton equally.

Verstappen and Hamilton collided through the first chicane at Monza, having earlier brushed wheels at the second chicane, and both were eliminated from the race.

Stewards investigated the clash and deemed that Verstappen was predominantly at fault.

He was handed a three-place grid penalty for the next round of the season in Russia.

It marked their second major on-track clash of the season after the contact at Silverstone, from which only Verstappen retired, and for which Hamilton was deemed culpable.

“Both drivers knew they needed to be ahead because of the difficulty to overtake,” said Horner, writing in his Red Bull Racing column.

“Max was keen to seize the momentum and Lewis was eager to retain track position.

“It was an awkward shunt, but both drivers were instantly able to confirm they were ok.

“With Lewis trying to reverse and get back in the race, even the medical car didn’t see the need to deploy.

“I’m grateful the halo did its job. I think even the most vocal of doubters have now changed their mind about it.

“I still share the same belief today – both played a part in it and it is difficult to apportion blame to one side more than the other.

“If the FIA wanted to make a statement, they could’ve imposed the same penalty on both drivers but the fault was deemed to be more on Max’s side and, because he didn’t finish the race, the only option was to give him a grid penalty, which we accept.”

“We’re witnessing one of the great sporting rivalries, not just within Formula 1, but within the sporting world for a generation,” he said.

“It’s intense and the stakes are high. It’s hugely competitive and nothing is being given up without a fight by either side.

“Also from our perspective, it’s hugely enjoyable to be back in a competitive position fighting for a world championship.

“After all, when was the last time a Mercedes car was not leading the championship at this stage of the year?”