Hakkinen: Victory for Ricciardo will be a major confidence boost 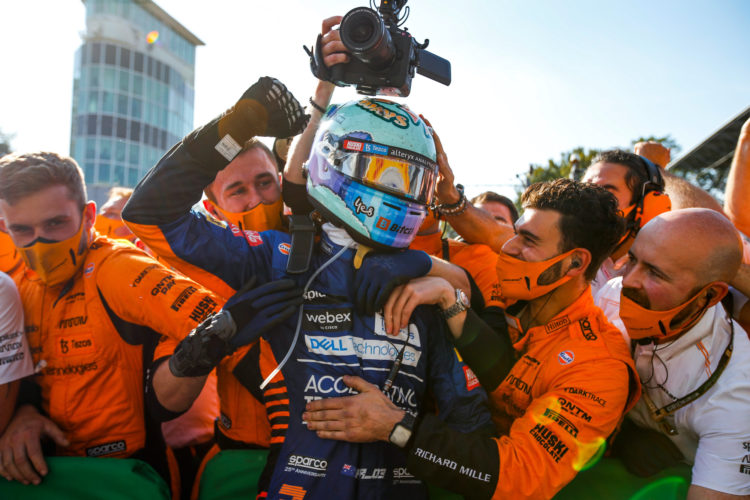 Former McLaren driver and two-time Formula 1 World Champion with the British team, Mika Hakkinen, has praised the “formidable” driver combination at McLaren following their 1-2 result at the Italian Grand Prix.

McLaren took its first win in F1 for nine years (Brazil, 2012) and its first 1-2 result since Canada 2010 as Daniel Ricciardo and Lando Norris shone at Monza.

Hakkinen, who took 20 race wins with McLaren during one of its many successful periods, believes the win for Ricciardo will give the Australian a major confidence boost following a tough start to his career with the Woking team.

Ricciardo joined McLaren this year and has struggled to match team-mate Norris, who has been the star of the season.

“I am so very happy for everyone at McLaren for achieving a fantastic 1-2 in Italy on Sunday. It’s a brilliant result, and one that they have worked very hard to achieve,” the Finn wrote in his Unibet column.

“Nine years is a long time to wait between race wins, especially for a team which has won 20 World Championships.

“To rediscover the winning formula is never easy in this business. During the 2015-17 partnership with Honda the team realised that it needed to take a new approach to F1. What we saw on Sunday was the result of that new strategy. Zak Brown and Andreas Seidl have done a brilliant job to lead the team into this era. It is an exciting time for everyone involved.

“To see Daniel Ricciardo and Lando Norris finish first and second on merit, controlling the race after a strong performance in Friday qualifying and Sprint Qualifying, was quite special. Daniel has taken time to settle into the team, but this is completely normal. It took me four years to win at McLaren – it has taken him six months.

“A new team means learning how to work with new people, adapting your style to their way of working, understanding the way the car works and all its complex systems. There is nothing easy about this, so Daniel has had to work hard. Winning the Italian Grand Prix is his reward and it will really boost his confidence.”

Norris was disappointed not to win for the team, instead having to settle for second – albeit his best result in the sport – but Hakkinen is certain it’s only a matter of time for the 21-year-old.

“Lando has been one of the big stars this season, finishing in the points at every race apart from Hungary and making it onto the podium three times. I am sure he wanted to be the driver who would take McLaren’s first win, but he did the right thing to show his speed yet support his team mate and secure the 1-2. His day will come,” added Hakkinen.

“Together Daniel and Lando make a formidable combination and it has been clear for some time that the team was getting closer and closer to scoring a win. All it took was for Red Bull Racing and Mercedes to have a less-than-perfect day and McLaren was in a strong position.”