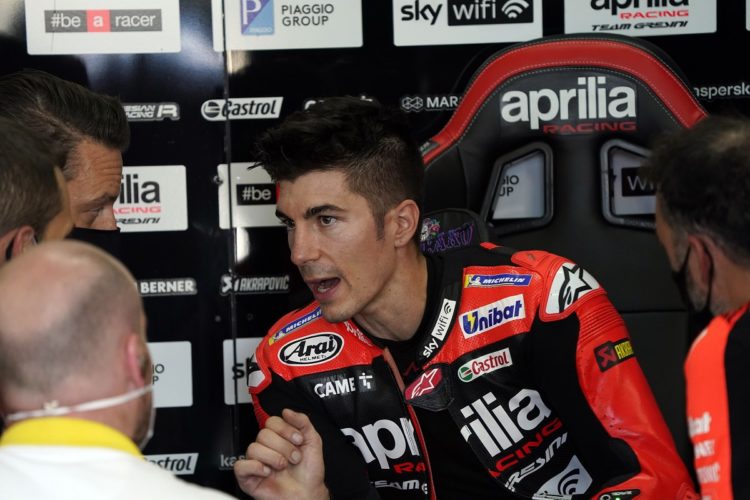 Maverick Vinales says he has managed to find good gains with his new RS-GP in areas he struggled to master with the Yamaha M1, though admitted progress was still needed.

Vinales made his debut with Aprilia in the Aragon Grand Prix in place of Lorenzo Savadori for the rest of the season having been sacked by previous employer Yamaha following the events of the Styrian GP last month, the Spaniard ending up 19th after making good progress with his new steed across the weekend.

Having only sampled his new machine in a two-day test at Misano prior to his race bow with the Italian marque, Vinales focussed on simply “getting kilometres” in the race as he tried differing set-ups in his quest to get comfortable with the RS-GP.

Vinales revealed though that the V4-powered Aprilia-which houses different characteristics relative to the more flowing nature of the inline-four M1 he used to ride-has allowed him to improve in certain areas in which he suffered with the Yamaha, the nine-time MotoGP race winner saying he was satisfied to have pinpointed the places “he needs to improve” going forward.

“I think we’ve learned about the points where we need to be strong and areas in which we need to improve, that’s clear from my side but overall it’s positive because I’ve been working well and wanted to do all the race and not risk too much to try and get experience on the bike,” said Vinales.

“We are starting from the bottom, we need to try and find a better set-up for my riding style because in a few parts of the track I felt very strange, but there were also some positive points where I was strong in which I have struggled in the previous years.

“This means the bike has some positive things but also negative ones, so we need to work on the balance and see what we can improve because I tried a different set-up for the race to try and see what the bike would do and the information was good.

“I’ll have the same mentality as here (at Misano), trying to get kilometres while trying to not make mistakes to try and understand the bike (better), this is work time and we need to build up.

“I don’t expect to be at the front there, I expect to struggle but hopefully work to find some potential in the next races.”

Aprilia team-mate Aleix Espargaro meanwhile continued to prove the pedigree of the ever-improving RS-GP by backing up his podium finish at Silverstone two weeks ago with a strong run to fourth at Aragon, the brand’s second best result since its return to the premier class in 2015 after his third in the British GP.

Espargaro admitted that bagging fourth at the Spanish venue was “even more difficult” than snatching his Silverstone rostrum as he “didn’t quite have the pace”, leaving him to rue rear tyre woes in the closing laps that would ultimately end his hopes of a second straight podium as Suzuki’s Joan Mir managed to escape.

“I’m very happy and satisfied, at Silverstone the podium wasn’t easy and today was even more difficult as I didn’t quite have the pace I did at Silverstone,” said Espargaro.

“The pace at the start of the race was superfast, last year (Franco) Morbidelli won the race doing 1:49.5’s and this year we were well into the 1:48’s which is unbelievable.

“At the end of the race i didn’t have any more traction and in the final five laps I couldn’t follow (Joan) Mir anymore so I just decided to finish the race and take the points, we are seventh in the championship so I’m very happy overall.

“This is very important because this is the second best result with Aprilia in the past five years so I’m happy, when you’ve tasted the podium finishing fourth isn’t enough but I’m satisfied because it was a very solid weekend which gives me a boost heading to Misano, which is a circuit we usually struggle a lot so we’ll try again there.”