Seidl revels in McLaren 1-2 but wary of regular deficit 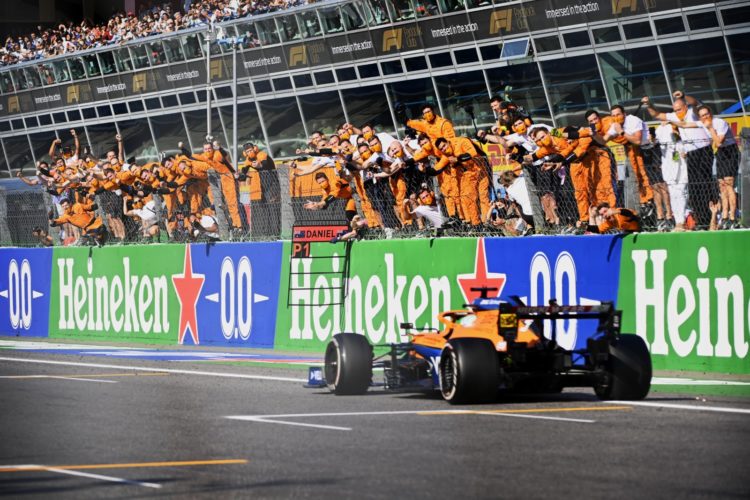 Daniel Ricciardo, McLaren MCL35M, 1st position, takes victory to the delight of his team on the pit wall from rear

McLaren boss Andreas Seidl says the squad’s Italian Grand Prix 1-2 is the “best motivation” but warned that it cannot get carried away with the success.

It came during a race weekend in which McLaren displayed strong pace throughout, having qualified fourth and fifth respectively, before classifying third and fourth in Sprint.

However the result came just a week after the team scored just a single point at Zandvoort, with Norris 10th, and Ricciardo 11th.

“In the end what I respect looking at Mercedes and Red Bull is simply that they have a car that can fight for the win every single weekend,” said Seidl.

“That is the gap we are having is a team compared to them. In the end it is a sensational result for us. But only seven days ago we were completely destroyed in terms of performance.

“That is the gap we still have to the top teams and also with our car. That is why we have to keep working hard in order to close this gap on all types of circuits.

“But a day like [Sunday] is the best motivation to keep going.

“We are very happy with what both drivers showed this weekend, and with Daniel making the steps now since the summer break in getting back to where he wants to be and we want to have him.

“And this in addition to Lando, who is in unbelievable form this year. I would say that’s the driver line-up we want to have a need to have in order to fight for Ferrari, and in order to keep going on our journey towards the front of Formula 1 again.”

McLaren’s 1-2 result enabled it to climb 14.5 points ahead of Ferrari in the battle for third in the Constructors’ Championship.