Ricciardo: Victory ‘makes the crappier days worth it’ 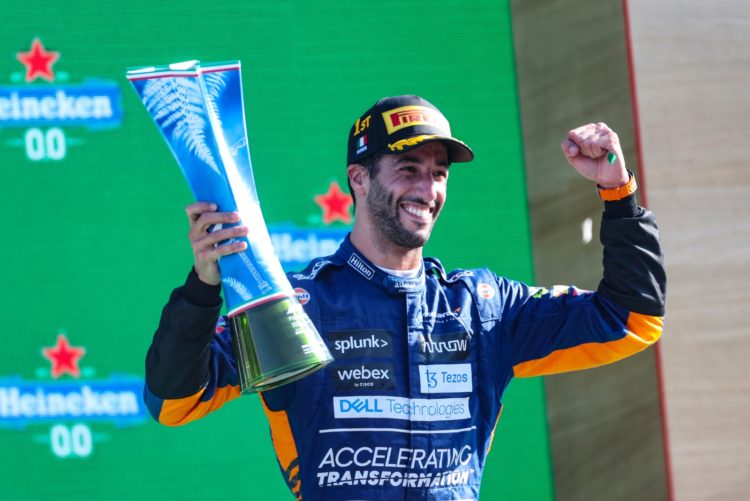 Daniel Ricciardo says he “never lost faith or belief” in his ability during low moments in his career and that his victory in Italy “makes the crappier days worth it.”

Ricciardo controlled the Italian Grand Prix after claiming the lead from polesitter Max Verstappen at the start.

Ricciardo headed team-mate Lando Norris to record McLaren’s first win since 2012 and its first 1-2 since 2010.

Ricciardo had endured a troubled first half of the season with McLaren in which he regularly trailed Norris as he tried to adapt to the MCL35M.

“I definitely try not to, like, make or dictate my life happiness around the sport, because it’s been three and a half years since I won, so I’d be pretty miserable most of the time if I just based my happiness on winning races,” he said.

“I think, like, through it all and a lot has happened since Monaco 2018, so to be back here in this moment that’s why we love the sport. It makes all those crappier days worth it and it’s as simple as that.

“There have been lows this year but deep down I never lost faith or the belief.

“I think I also just needed to step back and I think that’s where having some time off in August helped. I truly think that helped this weekend get to this position.”

Ricciardo added that McLaren’s performance through Friday, in which he qualified fifth and Norris took fourth, gave him belief that a strong result was within reach.

“The whole year has been something, something like a little foreign for me, something that’s been more challenging I think than I’ve had before,” he said.

“Obviously everyone sees. We’re an international sport so everyone has been aware of some of the struggles I’ve had this year.

“I think after Friday… even before Friday, but I knew after Friday that we had something this weekend.

“I think that’s why I was so kind of like just fired up because I knew it could have been a little bit better and I just didn’t want to waste that opportunity and obviously I haven’t had that many this year, or put myself in that position, so yeah, I think from that moment on it was pretty much on.”