Red Bull’s tone ‘shows it knew Verstappen was at fault’ 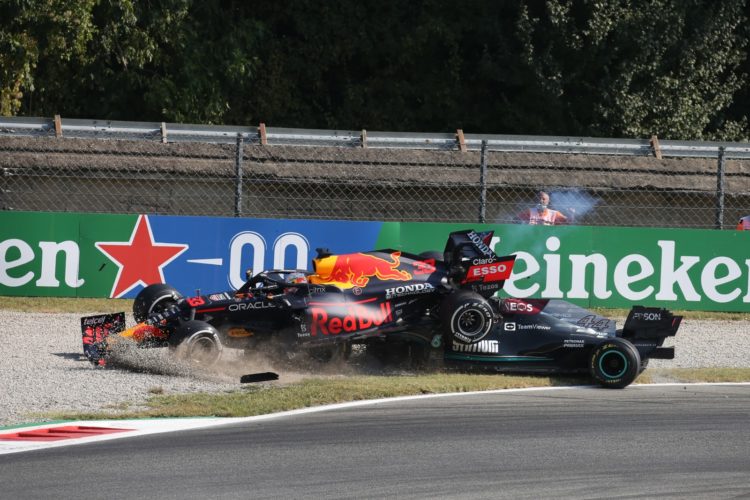 Red Bull’s tone in the immediate aftermath of the clash between Max Verstappen and Lewis Hamilton showed it knew the Dutchman was to blame, according to Mercedes’ trackside engineering chief Andrew Shovlin.

Verstappen and Hamilton came together at the Italian Grand Prix shortly after the Mercedes driver emerged from his pit stop.

The duo tangled and wound up in the gravel trap, from where they were both forced into retirement, with stewards deeming Verstappen culpable.

He will take a three-place grid penalty into the next event in Russia.

In the immediate aftermath of the incident Verstappen described the situation as “unfortunate” while team boss Christian Horner labelled it a racing incident.

“We obviously felt strongly that Lewis had done absolutely nothing wrong and Max was the one predominantly to blame,” said Shovlin.

“I think if you look at the fact even Helmut [Marko] and Christian weren’t trying to blame Lewis it sort of feels like they know Max is in the wrong because they will try to blame Lewis at any opportunity.

“I think it cost Lewis a win and certainly a second place so you’ll always feel three places is relatively easy to overcome if you’ve got a competitive car.”

Shovlin nonetheless accepted Mercedes needs to step up its own performance after a weekend in which it finished first and second in qualifying but came away with only a third-place finish.

“That’s all in the past now, we need to make sure we put a good weekend together in Russia,” he said.

“We’ve had pretty messy races for quite a long time now and really the team needs to not get distracted and deliver the kind of performance we know we can and know we need to [in order] to win these championships.”