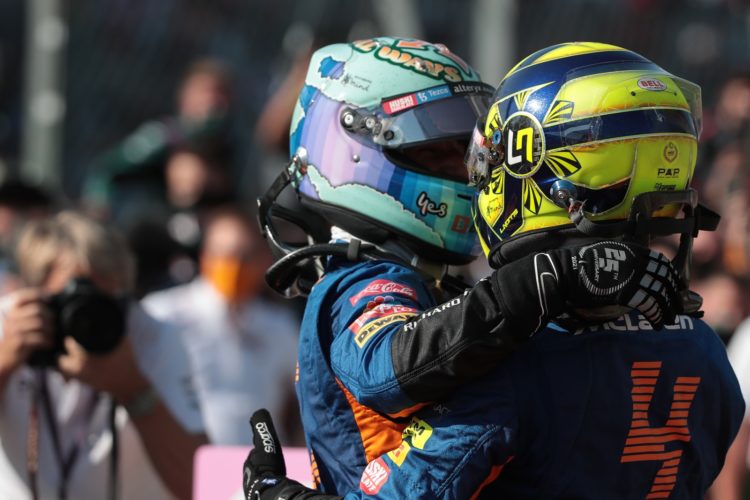 Lando Norris says McLaren did a “perfect job” and was fully deserving of its victory at Formula 1’s Italian Grand Prix.

McLaren ended a near nine-year win drought courtesy of Daniel Ricciardo while Norris completed a 1-2, McLaren’s first since 2010.

McLaren displayed competitive pace throughout the weekend at Monza, with Ricciardo and Norris lining up second and third on the grid following the outcome of Sprint, having qualified fifth and fourth respectively.

Ricciardo grabbed the lead from Max Verstappen at the start and kept the Red Bull driver behind throughout the first stint.

Verstappen’s slow stop dropped him behind Norris, meaning both McLaren drivers were ahead of the title contenders when they eliminated themselves by colliding.

From that stage Ricciardo preserved the lead while Norris, who was overhauled by Charles Leclerc when the Safety Car came out, passed the Ferrari driver at the restart to complete a 1-2.

“I think a lot of times you’ve seen other people win, it’s because of a bit of luck here and there and so on but I think all weekend we’ve just done a very good job,” said Norris.

“We were in the right place at the right times, we’ve done a good job of the strategies.

“We put ourselves in this better position and with my side, getting out of Lewis, with Daniel getting past two of the cars then he put himself in that position and that was just because we did a good job.

“We had a fast car and we maximised everything we had so I don’t think there was any luck with what we did this weekend. I think from the beginning we knew we could have a good one.

“We bounced back well from Zandvoort, from one of our worst races of the season, to probably the best we can have so… actually it can’t actually get any better than this.

“We just did a perfect job this weekend, from the team’s side, from our side as drivers, I think we worked pretty well and there was no luck with it, which I think makes it definitely a bit sweeter because it’s just deserved.”

Norris has spent his entire Formula 1 career with McLaren, having been part of its junior system, which led to a maiden test in mid-2017, ahead of his eventual debut in 2019.

“That hard work and effort that everyone’s put in, here [at the circuit] and back in MTC as well definitely makes it sweeter for everyone,” he said.

“To be on this little journey we’ve had together already to go from one podium a few years ago to a few more this season and now a 1-2 it’s pretty insane to think of, but it’s such a cool feeling.

“I’m sure many people will think we’re lucky because the other two crashed but Daniel was ahead from the beginning and led the race so I think he deserved it, and we still had to do a bit of overtaking and defend the whole race. Yeah, deserved by everyone.”