Verstappen didn’t want to take ‘easy route’ off the track 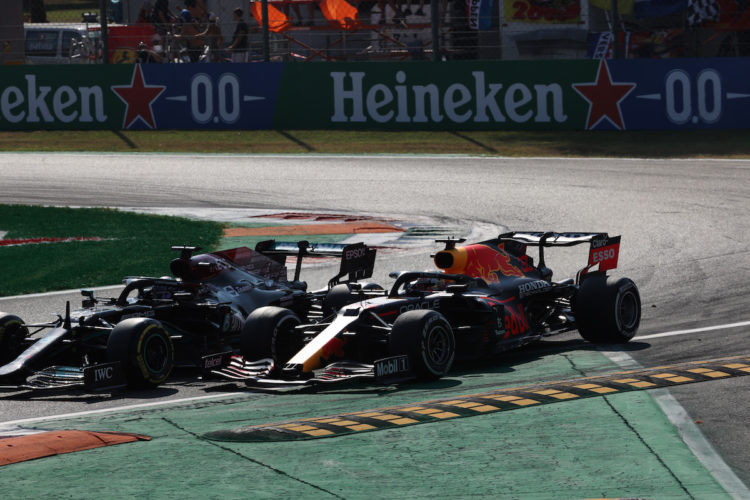 Max Verstappen says he didn’t want to chance cutting the second corner at Monza amid his crash-ending battle with Lewis Hamilton.

The two title protagonists retired from the race after a collision at the first chicane when Verstappen attempted to overtake Hamilton around the outside.

Verstappen drove over the kerbs which pitched his car on top of Hamilton’s – both drivers walked away uninjured from the crash.

Verstappen’s team-mate Sergio Perez was handed a time penalty for gaining an advantage by cutting the corner amid a battle – a scenario that Verstappen says he was keen to avoid.

“I didn’t want to take the easy route and just drive off [the track], then you get into a moment like Checo with a penalty or whatever,” Verstappen said.

“I didn’t want to get into that scenario. I trusted him to fight, I wanted him to fight, everybody starts to put the link between Silverstone [when Verstappen and Hamilton last collided] in the memory, but I don’t think that had anything to do with it.

“We are all professional enough to keep on going and race each other.

“Unfortunately we came together, it would’ve been nice, if we could’ve raced, what happens afterwards in three and four. We didn’t get that far.”

Verstappen added that he will not alter the way he races Hamilton, despite the series of incidents the two have endured this year.

“I don’t think so,” Verstappen said when asked if the Monza crash changes his attitude towards racing the seven-time world champion.

“We are both professional enough. I’ve come together with other drivers, these kind of moments, sometimes they happen.

“No one wants them to happen, but sometimes in the heat of the moment these things happen.”