Ricciardo: McLaren will put itself ‘in the hunt’ for Monza victory 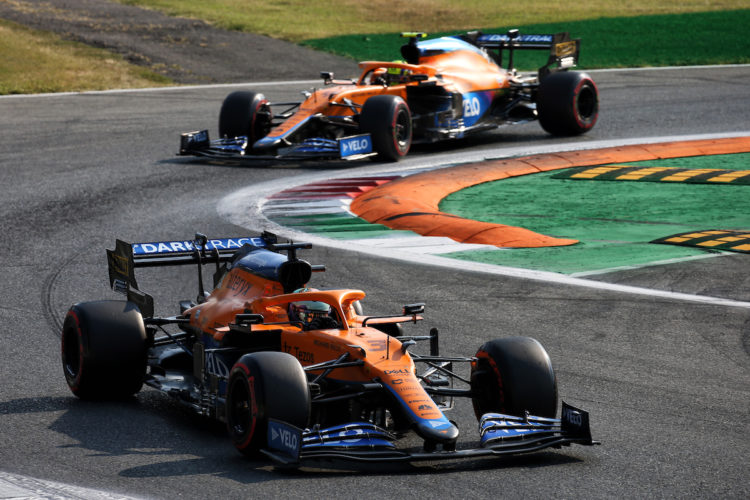 Daniel Ricciardo says McLaren will put itself in the fight for a race win on Sunday at the Italian Grand Prix, following a successful outing in the F1 Sprint.

However, he will begin tomorrow’s race from second on the grid, as Valtteri Bottas drops to the back with a grid penalty.

McLaren’s last grand prix win came at the 2012 Brazilian Grand Prix – and although Ricciardo understands that luck needs to be on his side, the Australian has an eye on victory.

“I am ready to make that a reality for sure [ending McLaren’s win drought],” Ricciardo said.

“We’re close. I know a few things will probably have to swing in our favour tomorrow but we will certainly put ourselves in the fight, in the hunt.

“Very excited to get going with that and try to make some good stuff happen. They were second here last year.

“We’re there or thereabouts. I am hungry. Anyone’s that saw me after qualifying yesterday, I think there not surprised about this outcome today.”

Ricciardo’s team-mate Lando Norris will start behind him in third, ahead of Lewis Hamilton who is set to take the start in fourth.

Both Ricciardo and Norris endured the shorter race on the Soft tyres, and managed to retain their track positions throughout the 18 laps.

“We knew with the short race as well it was just to try and take what you can,” Ricciardo said.

“You also don’t really know what the others are going to do. I didn’t expect everyone around to be on Mediums. I think most were.

“You just don’t know and because it’s a new format – it’s only the second time we’ve done this style of weekend – I think everyone’s still trying to figure it out.

“Personally speaking, it worked well for me today so I am happy with that.”