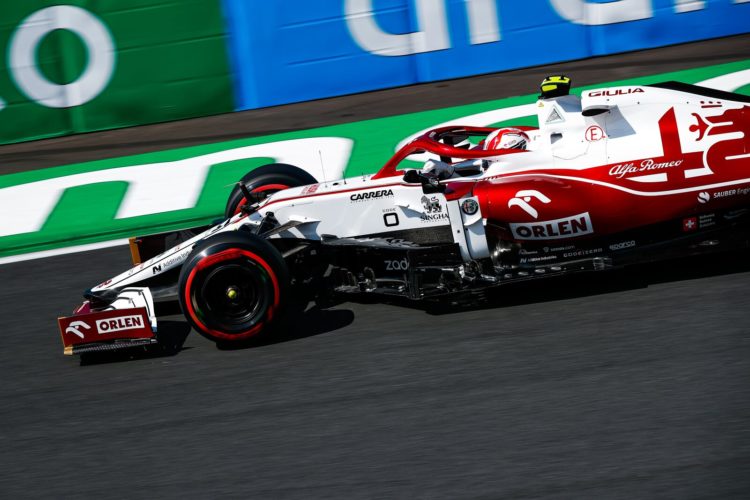 Robert Kubica filled in for Kimi Räikkönen at Zandvoort and quipped it was his first proper opportunity to race in Formula 1 since 2010.

Alfa Romeo reserve Kubica was drafted into action on Saturday in the Netherlands to replace Räikkönen after the Finn returned a positive Covid-19 test.

It marked Kubica’s first appearance in the business end of a grand prix weekend since his season with Williams in 2019, which came after an eight-year absence from the grid.

Williams’ lack of performance in 2019 meant Kubica and team-mate George Russell were effectively unable to battle with drivers from other teams as they spent the year significantly off the pace.

Kubica qualified 18th at Zandvoort, ahead of Haas rookies Mick Schumacher and Nikita Mazepin, though started 16th after Sergio Perez and Nicholas Latifi were forced to line up from the pit lane.

Kubica maintained his position at the start and ran a lengthy one-stop Medium/Hard tyre strategy, coming in after 40 of 72 laps.

He was overhauled by Perez and Latifi though profited when AlphaTauri’s Yuki Tsunoda suffered a terminal power unit issue.

He had looked set to finish in 17th place but gained a spot when Russell pulled into the pit lane due to a gearbox problem, just as he successfully reeled in the other Williams of Latifi.

Kubica overhauled Latifi into Turn 1 on the last of his 70 laps – having been lapped twice by victor Max Verstappen – to pick up 15th spot.

“We were all thinking it’d be a chaotic race with some interruptions and yellows, stuff like this, but nothing happened,” said Kubica.

“70 laps, it has been tough one, but also mentally, you know, there’s so many things happening which you don’t know, you don’t know how the car will feel, how much grip you will lose [from the tyres].

“I nearly lost the car by just following Lewis [Hamilton], I let [the leaders] by into Turn 1 and thought ‘okay I take it easy into Turn 2’ and suddenly I have no grip – following the cars is very difficult, I knew it is difficult but I didn’t remember it, it’s really, really challenging!

“Then of course I was losing the tyre, Latifi was losing one lap, one and a half lap later, I had a good last sector, managed to exit [well], used what I had from the power unit, and with DRS, and for me I knew it would be quite an easy move so yeah, managed to overtake him, which to be honest was a good reward. Not because it is him, but [because] I felt for the first time since 2010 that I was actually racing in Formula 1.

“And although, with all these difficulties, probably it was an easier race than we had often [in 2019] but there are a lot of things I can improve if I review everything, but all in all I go home really satisfied.”

As the team’s reserve Kubica participated in eight practice sessions with Alfa Romeo across 2020 and 2021 prior to receiving the call-up to replace Räikkönen.

But despite those outings Kubica expanded on the challenges of stepping into a race seat with such little notice.

“The fact is that even if I’m reserve driver in our team since last year probably I did in total three starts [before] going to the grid in those two years,” he said.

“Even when you do Fridays you never really try [for example] to attack pit entry, yes you are the reserve driver but in reality you never think it [a race chance] might happen.

“Yes, you know it can happen, but you will never risk some silly stuff [during practice], especially when you are jumping [into the car] every three or four months, you are always recovering the [lost] time and there is no continuity.

“It is like giving a tennis racket to the player after two years and saying to him ‘go to play a Wimbledon match’.

“It is nearly impossible to jump in and being on the pace, although if it would be last year I’m confident [that] the feeling was much better for me.

“We never thought about working on [the issues with the 2021 car] because yes I’m reserve driver but you are focusing on the race drivers, so I was not even really pushing to try and invest some time and probably even money to change things.

“I would like to again thank the team as they supported me massively.”

It has not yet been determined whether Räikkönen will be able to return to action at Monza.