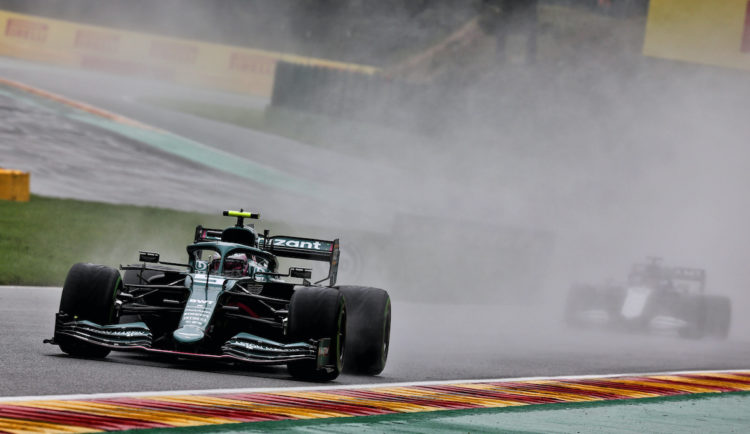 Last weekend’s Belgian Grand Prix had to be abandoned due to wet weather, with just two laps completed behind the Safety Car, making it the shortest race in the sport’s long history.

But some fans and even Bernie Ecclestone complained, highlighting that F1 has raced in worse conditions without the need to cancel a race, such as those at Fuji in 2007.

But Vettel and Alonso explained why that is and the changes that have contributed to it now being harder to race in the wet, with visibility the main issue.

“I think the appetite for risk is the same as it was back then,” said Vettel. “I think we’re happy to race providing it’s safe.

“The cars have changed. I think there’s significantly more ground effect with the cars that we have now or more downforce. We seem to suck more water off the ground.

“The tyres have changed as well. I think the extreme wet tyres that we had, from what I remember of those days, made it easier for us to race in very, very wet conditions with a lot of water on the track. I think those are probably the key differences.”

Alonso agreed, with wider tyres not only kicking up more spray but also contributing to increased aquaplaning due to a larger contact patch which doesn’t cut through puddles as easily.

“The visibility was the biggest thing that he changed over the years. I think the cars for whatever reason or the new aerodynamic rules, they have more spray when you are running behind people,” the Spaniard added.

“Our tyres are wider now than what they were in 2007. Probably the extreme tyres were a little bit stronger back then. Maybe the size of the tyre was helping for the aquaplaning.”

Drivers welcomed the decision by the FIA not to race, with only Max Verstappen believing conditions were safe enough – likely because he was the lead car and didn’t have to contend with the spray reducing forward visibility.