Verstappen: Not up to me to stop Dutch fans booing Hamilton 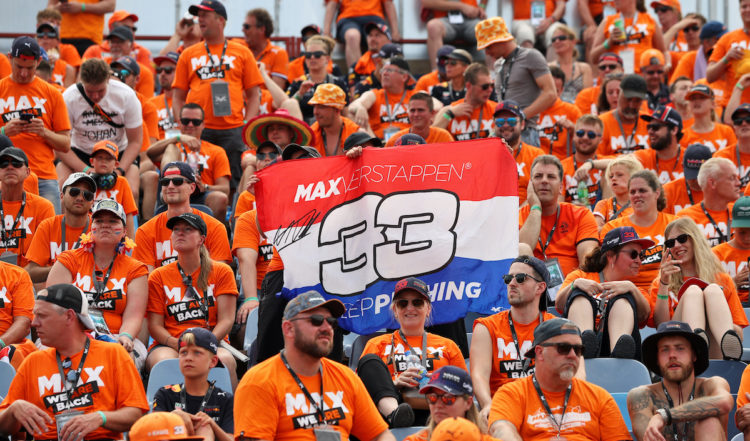 Hamilton has been the subject of booing from fans in attendance at multiple races this season, namely the Hungarian and Belgian rounds which have a large contingent of Verstappen fans in the grandstands.

It comes after their British GP clash, which saw Verstappen retire following a violent crash after contact with Hamilton’s Mercedes at the high-speed Copse corner.

With F1 returning to the Netherlands for the first time since 1985, a huge 70,000-strong crowd of mainly Verstappen supporters – known as the Orange Army – will be in attendance and there are concerns they will boo Hamilton, no matter the outcome of the race.

Red Bull’s Verstappen says such a fan reaction is expected and it’s not up to him to discourage that.

“I look at it like this…when you go to a football match, you come into the home ground, the opposition will be booed at some point,” the Dutchman said on Thursday ahead of his home event.

“It’s not up to the local club to go on to the speakers and say ‘guys, you cannot boo’, because it will naturally happen.

“I don’t think it’s up to me to then say ‘guys you cannot boo’ because at the end of the day I am not them and I have to just focus on what I am doing on the track.

“I am pretty sure that most of them are here for a great weekend to see cars racing and of course, some of them will boo. I cannot decide for them.”

Verstappen doesn’t believe it will give him an extra boost, or impact Hamilton’s performance this weekend.

“That would be bad if that would give me an added boost,” he said. “As long as it doesn’t affect Lewis I guess that’s what you want to hear, right? That’s the most important.

“What I hope from the whole weekend is that everyone is having a good time and they enjoy seeing the cars on the track. Seeing us battle it out there for the best possible result.”